The Iceland volcano: confronting the fire

When the chance arises to experience a once-in-a-lifetime event, like seeing Iceland's erupting Eyjafjallajokull volcano, you should seize it today because it could be gone tomorrow.

by Bryce Lowry
in Inspiration, Travel

“I must go see it today, because it might be gone tomorrow”. That was the explanation my new travelling companion, a Reykjavik local, gave for joining us on our Arctic Adventures ride out to see the the Eyjafjallajokull volcano eruption.

The volcano in Iceland that has terminated travel plans for so many was just two weeks ago a dramatic, once-in-a-lifetime traveller’s spectacular.

How true my new friend’s words have turned out to be.

Why Australia is the best vacation destination

The ice
Three hours south-east of Reykjavik, the plume of steam and smoke from Eyjafjallajokull (can you say Aya-feeyapla-yurkul? I can’t) rose monumentally into the clear azure sky over the mountains in front of us. It was time to see what our Super Jeep could really do.

For the Top Gear inclined, the Super Jeep is a white, luxury, six-door, extra long wheel base, turbo charged, V8 diesel Ford F350. Kitted out with colossal 48 inch tyres it growled and bounded furiously over the cloud-like permafrost of the Eyjafjallajokull glacier, like a ravished polar bear chasing down its first hot meal of the spring across the roof of the world.

‘Ride Of The Valkyries’ from Apocalypse Now played in my head as we raced towards ground-zero. We were now part of a rampaging flash-mob armada of what seemed like every other steroid infused 4WD and quad bike in Iceland that dared take on the glacier.

Not everyone made it. ‘Glacial statues’ our driver called them — the frozen, broken chassis of the fallen; abandoned to and devoured by the ancient ice. Only a few days later, two unfortunate souls perished out there when they ran out of petrol.

The fire
“When a volcano erupts anywhere else, people run away. In Iceland, we just want to get closer,” our driver proclaimed, proudly. And up-close he got us.

After conquering the glacier our mechanical behemoth started its climb toward the crater. The powdery, pure white snow succumbed to gritty, pitch black ash.

We pulled up just 900m from the new fissure that had opened up under the feet of some like-minded sight-seers, who had to be rescued, two days previously. The spectacle before us was jaw-dropping.

The centrepiece of the steaming, sooty lunar landscape was a 400m wide gouge of inferno; the Earth’s freshest wound. It fizzed, snarled and gargled, thrillingly spitting up two fountains of searing, orange magma 200m into the icy air in five second, syncopated convulsions. Mother Nature was giving birth.

Lava spewed from one side of the crater, oozing down the side of the brand new mountain face in a slow, hellish torrent. As the burning river of fire cascaded over itself, creating and then swallowing its own firefalls, it boiled the ice under it throwing up a colossal cloud of steam, scarring the otherwise crystal clear, vanilla sunset.

As it grew darker, and much colder, the full majesty of Eyjafjallajokull’s fury came into full view. The fountains of magma, now numbering four, were seismic fireworks against the purple backdrop; their fallen embers of lava forming a glowing red, pearly ring around the jaw of the violent beast.

The lights
The temperature dropped even further and just as the throngs of spectators had invaded this alien land en mass, so we all about faced to return. But Mother Nature had an encore.

Our retreat back across the frosty wasteland was halted by the appearance overhead of the fabled Northern Lights. On the ground, the twilight was decorated by the red glow of the brake lights of the stopping vehicles, the silence broken only by the distant howls of glee from their passengers as they gazed up at the wonder decorating the dusky sky above. 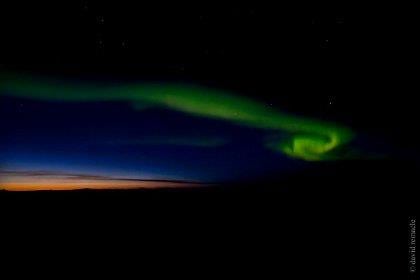 With the orange glow of the volcano in the distance, shards of green, white and purple light shimmered, danced and swirled from one horizon to the other, like a cosmic curtain drawing on the greatest show on Earth.

The travel advice
That was two weeks ago. The fissure I witnessed has given over to a much larger scale eruption. The tours have ceased. Now what was my greatest travelling drama and privilege has become everyone else’s greatest travelling nightmare.

My travel advice – when the opportunity comes, take it today because as my Super Jeep companion said, it might be gone tomorrow… it’s probably your only chance.

Words, images and video by Bryce Lowry; except for the photo of the Northern Lights which was taken by David Remacle who was on the same tour.

Bryce Lowry travelled to the Eyjafjallajokull volcano from Reykjavik with Arctic Adventures.

Arctic Adventures combine day trip adventures to the natural wonders of Iceland’s with activities such as caving, hiking, climbing and snowmobiling. Visit www.arcticadventures.is

Transfers to and from Keflavik airport were courtesy of www.flybus.is