You all live in a convict colony; 20 years of The Barmy Army

The Barmy Army is celebrating 20 years of singing, sledging Aussies and supporting England’s cricket team. LARA BRUNT caught up with co-founder PAUL BURNHAM who is in Australia for the current Ashes series.

by Lara Brunt
in Sport 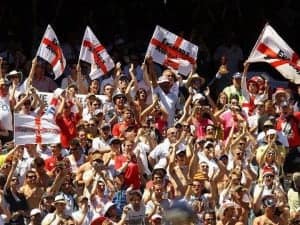 How did the Barmy Army begin?

The Barmy Army started on the 1994-95 Ashes tour in Australia. The Aussie media called us ‘barmy’ because we were supporting a tour that was losing and ‘army’ because there was a lot of us. Everybody that was there together went to the next [England] tour in South Africa.

Now, 20 years on, we’ve got 40,000 followers on Twitter, nearly 50,000 on Facebook and nearly 30,000 members. It’s been something that’s evolved over time and it’s just about supporting the England cricket team in a positive way.

How many fans have you got travelling with you for this series?

We’ve got 700 over the five tests. Obviously, it’s lot more expensive than it used to be, but the passion for watching England abroad will always be there so people will find the money.

We’re seeing a lot of new tourists coming here who have obviously saved up for the trip, as opposed to people who are probably still recovering from how expensive it was three years’ ago [when England last toured Australia for the 2010-11 Ashes series].

Australian fans and media first embraced the Barmy Army for its unwavering support of lacklustre England teams. Now that England is winning, has their attitude changed?

I think you guys were quite happy winning the cricket and letting us out-sing you and perhaps now it’s not quite the same. But I think you tend to have a go more at your own team for not winning than us for supporting a team that suddenly started winning.

I like to think it’s a very strong relationship with the Aussies and, actually, as our songs have got better and funnier, I think more people have liked the Barmy Army than perhaps they did when it first started.

How do the songs and chants develop?

Just through various people making them up. People will try a song out and see whether or not other people join in. If they don’t, they know it’s not a very good song; and if they do, it tends to take off.

The great thing about cricket is that you’ve got a lot of time to come up with a chant. You can get back after a day’s play and see what Kevin Pietersen or Shane Warne said and you can make up songs, either to support your team or to sledge the opposition. We’re not going to win any song contest but we do think it makes people laugh, which is the main objective.

In the early days of the Barmy Army there was quite a bit of snobbery from the cricketing establishment, especially in England. Has that changed?

The Barmy Army is allowed to get behind the team at all the games in England other than Lords and now Trent Bridge, where they do let the Barmy Army in but they don’t let the trumpet player in. So it’s pretty similar, really.

You still find the old school people who’d rather watch test cricket the way it was supported before the Barmy Army. But most people think it’s good for the game and that people having fun and supporting the team in a proactive way is a good thing.

The irony is that the Barmy Army is probably more traditionalist than the traditionalists that don’t like us. We love test cricket, we follow test cricket all around the world, but we don’t follow the Twenty20 game. The same people who might criticise us are the ones that allowed Twenty20 to come into the game.

Has there been a favourite Ashes moment for you over the last 20 years?

Obviously when we won in Melbourne in 2010/11. That was pretty special because we knew that we were going retain the Ashes after winning them in 2009. It’s all been good fun for us, win or lose, but obviously the magic moments are when you achieve what you’ve been hoping to watch for 20 years, which was England winning away.

Is there one player who has stood out as giving the most memorable Ashes performance?

Darren Gough in 1994-95 really stood out for us because he was one of the few players that was really performing at top level and probably would have got into the Australian team. It’s probably more the people behind the scenes that have done some good things, though. Geoff Miller, the selector, has done an amazing job.

What’s your prediction for this series?

Mitchell Johnson copped it from you in the 2010-11 Ashes series. Which Aussie players are in your sights for this series?

Mitchell Johnson and Michael Clarke, I guess. Clarkey because he’s made a bit of a fool of himself in the press. And we’ll probably have a bit of go at the coach [Darren Lehmann] because what he said about Stuart Broad was a bit unnecessary [Lehmann labeled the Englishman a cheat when he didn’t walk after edging the ball and being incorrectly given not out in the first test of the 2013 Ashes at Trent Bridge]. Lehmann’s shot himself in the foot in my opinion because Stuart Broad will perform much better this series. But really it’s about supporting our team.

What’s your view of the Aussie supporters’ club, the Fanatics?

Well, they’ve just beaten us in a 20 over game and they did us in a drinking contest, so they’re getting better. But their singing is not in our class.