Australia's devastating lost to New Zealand in 2008 was a distant memory, as the Kangaroos held the trophy high in the air after defeating the Kiwis 34-2 in the 2013 Rugby League World Cup final. 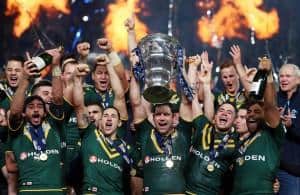 “I’VE been telling a white lie. 2008 still hurts, and we wanted to win it and we can’t wait to take the World Cup home.”

The reason the simplicity of this sentiment rang true is because it brings our nations captain down to the level of a fan. People like you and I, who felt the exact same way as every player on that pitch felt five years ago.

International Rugby League is on the rise, and no bigger proof of this was 2008, as we watched the Kiwi’s lift the World Cup Trophy, while our boys sat disillusioned on the floor knowing it will be five years before they get another chance.

But, let’s be honest. 2008 was a long time ago. Myley Cyrus was still masquerading as Hannah Montana. The Kings of Leon were singing about the extreme temperatures achieved in their sex lives, and sadly the world lost Heath Ledger.

But in Rugby League circles, the memory which  lingers: Billy Slater throwing a Hail Mary pass to no one only to be scooped up by a flying Benji Marshall, putting the Kiwi’s in the lead, which eventually handed them the World Cup.

With Smith, Slater, Inglis, Thurston and Gallen being the only survivors left of the 2008 campaign. It could be easy to suggest what happened in 2008 should be a thing of the past as it would mean nothing to the boys who were not there to feel the pain. But I assure you, this ideal is far from the truth.

Adding to his previous statement, Smith, said of his teammates “You pull this jersey on and you play for one another, we know our teammates need us and we play for each other.”

It’s this spirit which saw Australia dominate their World Cup campaign and play a miraculous 400+ minutes without conceding a single try.

Now, as a staunch NSW and Dragons man, I must confess. The combination of Smith, Slater and Cronk gives me nightmares. Add Thurston to the equation and I wake up in a cold sweat. But seeing these boys run out in the Green and Gold makes my nightmares justified, as you can rest assured they are all class and will turn on a performance every time.

As the teams walked out and were introduced to the 74,468 strong crowd, it was obvious Australia was not the crowd favourites. But this didn’t seem to bother the Aussies as they came out of the blocks firing.

With brutal tackles and ruthless kicks, Australia made it clear from the start they were here to win this match, and judging by the early body language of the Kiwis, it seemed like they felt it.

Early points came from an exchange of penalty goals with both Johnathan Thurston and Shaun Johnson landing one each to make the score level at two all, but these two points were the last New Zealand was set to see as Australia opened up a five try demolition of their opposition.

Coming back from a knee injury which almost saw him out of this campaign. Billy Slater quickly made amends for his 2008 blunder by scoring his first of two tries via a cross-field kick off the boot of Thurston.

Not to be outdone, Storm teammate Cooper Cronk looked almost certain to score next as he gathered an infield kick from Jarryd Hayne to touch down under the posts. However after a lengthy viewing from the video ref the try was disallowed.

However, Cronk didn’t have to wait too long for a second chance at getting over the line. Minutes later Australian winger Darius Boyd split open the Kiwi defence and raced down the side line. He put in another infield kick where the crafty half-back and Dally M player of the year found himself in the right place, scooping up the kick and putting the Aussies 12-2 up.

Converting the try and adding two extras via another penalty goal, Thurston increased the lead to 16-2 at the break, and also sailed his way into the record books as he became Australia’s highest point scorer in International Rugby League, over taking Mick Cronin’s record of 309 points

With the second half starting much like the first ended, it was the Australians again who launched the attack as Captain Cameron Smith darted down the blind side, linking up with Thurston and Boyd who got a beautiful ball inside to Slater who bagged his second for the night.

Kicking infield seemed to be the order of the day, as once again the Kangaroos launched an aerial attack via their wingers to put points on the board. Only this time it was left up to Australian winger (and Dragons legend) Brett Morris who put boot to ball for a flying Jarryd Hayne.

Hayne, who seemingly had little control of the ball, juggled it to his foot for yet another kick up field, before a flying Morris finished what he started and scored one of the greatest tries in test football.

Man of the match Johnathan Thurston made no mistake with the boot, nailing seven from seven, to close off a great victory for the Australians at the famous grounds of Old Trafford.

As a fan of Rugby League and a big believer the international game is in good shape, seeing Australia lift the trophy was something special for all the people who travelled around the UK just to be a part of it.

What we saw and what we have witnessed here is a dynasty. This is truly the best Kangaroos team I have seen in my lifetime and they will rightfully be talked about for years to come.

But 2017 is a long way away, and with the likes of Smith, Gallen, Cronk and Slater all being in their 30s, this dynasty will sadly come to an end soon.

By comparison the young sides of England and New Zealand will be hitting their strides and be better for this run.

As Kiwi Coach Steve Kerney said. “The boys will be better for the loss. They’re young and hearing the cheers of the Aussies will make them hungry for it next time.”

On a personal note, I’d like to extend congratulations and a big thank you to the RFL for hosting the 2013 Rugby League World Cup.

Living in the UK I have missed my league and this has been one of the greatest international competitions ever put together. It has seen some of the best teams and players be competitive for six long weeks and play their hearts out at some of the worlds finest stadiums.

To be part of it as a fan and a supporter of our great game has been a truly wonderful and a remarkable experience. I say a big thank you to all involved.

You made it a great competition.