Where to watch the AFL Grand Final 2012 live in London

AFL Grand Final 2012 live in London: The best bars to watch the big game on the big screen. 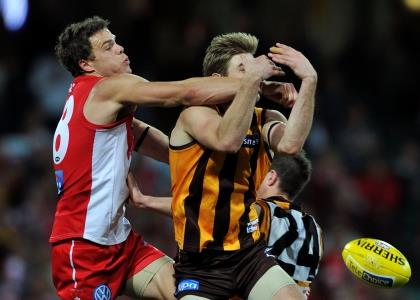 Looking for where to watch the Grand Final live in London in 2013? Click here.

MEAT PIES and beer for breakfast? What’s an AFL Grand Final without them?

With the bounce (that’s kick-off in AFL terms) at the MCG scheduled for 5:30am UK time – the showdown between the soaring Sydney Swans the mighty Hawthorn Hawks is the biggest footy game of the year. Here’s where to watch the AFL Grand Final in London:

Also see: Where to watch the NRL Grand Final 2012 in London

Note to the bleary eyed faithful: Tubes stations are given as a point of reference. You’ll need to be there before the tubes run if you don’t want to miss the bounce.

Larrik Inn
With more Antipodean beers available than any other venue in London, where else to head on Saturday morning decked out in your AFL team’s colours than our Aussie Times favourite Fulham pub — The Larrik Inn. Doors open at 4.30am, and with only 350 tickets available to, according to them, the ‘best live AFL Grand Final Party in London’ — you better get in quick.

Tickets are £10 and include a FREE pie. Drinks start at £2.75. Get your ticket at the Larrik Inn bar or over the phone today!

Bloomsbury Bowling Lanes
For those who want somewhere central, with something a little extra – Bloomsbury Lanes are hosting an AFL Grand Final Party with a difference. With five large screens, a footy marathon of classic Grand Final’s past, a half-time Handball Competition, hot pies and sausage rolls from the Fleet River Bakery, and Australian craft beers — this has got to be the best place in North London to get your AFL footy fix.

Plus there’ll be an on-site barista serving Monmouth Coffee.
There’s plenty of space for everyone to watch the game with doors opening at 3.30am. Tickets are £7.00 and available from the website below.

The Underdog Bar, Clapham Common
With giant plasma screens showing the AFL Grand Final in High Definition — here’s a place for those who want to see every handball, kick and mark in intimate detail. Doors open at 5am for the 5.30am bounce.
Entry is free and there’s cheap deals for a pint and a pie. Why would you need anything else?

Clapham Grand
With Aussie beer, food and goodies, and the chance to win some great prizes, Clapham Grand is putting in a bid for the south’s best AFL Grand Final party. Not to mention their massive screen – the largest sports screen in the UK! Throw in six plasma screens strategically positioned so punters never miss the action and watching sport at The Grand is almost better than being there!

Tickets are £10 and include entry, an Aussie pie and a beer. Doors open at 4.30am with kick off at 5.30am. Plus there’s VIP Tables and VIP Boxes available.

The Junction Bar (hosted by the London Swans)
Expect this one to go off as it’s a Sydney Swans final. And with seven large screens and one GIANT screen it will be a great place to catch the match live in the North. There will also be a raffle for an ‘On the Go 8 day tour’, as well as a bunch of other give-aways during the morning.

Doors open at 5.00am for the 5.30am kickoff, tickets are £5 and MUST be purchased before the event.

Walkabout
Who could forget the Walkabout bars of London!? They will be showing their support with parties to be hosted in the wee hours of Saturday morning.

Belushi’s
Another popular venue in Shepherd’s Bush, Belushi’s will be hosting their own AFL GF Party with doors opening at 5.00am. Tickets are £10 including a free pie and a pint.

IMAGE: The Sydney Swans will take on the Hawthorn Hawks in the 2012 AFL Grand Final on Saturday 29 September. (AAP Image/Paul Miller)