Where to watch the 2013 NRL Grand Final LIVE in London

Rugby league fan? Don't miss all the live action of the 2013 NRL Grand Final this October. Here's the best bars in London to watch the big match on 6 October 2013. 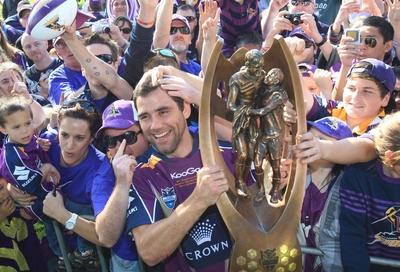 COME 6 October the dust will well and truly be settled from the AFL Grand Final of the weekend before, and Australians in London will be gearing up for another great weekend of footy final fever. The NRL Grand Final 2013 is kicking off on Sunday 6 October at the much more respectable hour of 9am. The pinnacle of the 2013 Aussie rugby league season, it will be a show-down to remember, and best done surrounded by fellow fans, a meat pie and a cold brew.

Join your fellow Aussies at either Walkabout, both hosting an epic Grand Final Party to see off the season.

Doors open at the SHEPHERD’S BUSH WALKABOUT at 7.00am for the 9.00am kick-off. With 28 plasmas and a giant HD screen you’re guaranteed a front row seat. Entry is FREE but you can register at ShebuWalkie.co.uk. Replays at 12pm and 3pm.

SHEPHERD’S BUSH TEMPLE is planning an epic party, for those who just don’t want to go home from the night before. With doors opening at 6am, the £20 entry ticket will get you two free drinks and a breakfast bap. Get your mates together and guarantee yourself a seat by hiring a booths for £50. See Temple Walkabout Facebook page.

We expect it will also be shown at THE SLUG AT FULHAM, and are awaiting confirmation.

Having your own Grand Final party or know of one we have missed out? Tell us all the details.

Where to watch the 2013 AFL Grand Final in London