A 30-year-old carpenter's apprentice, Rob Quiney admits he's crawled through a small window of opportunity and he's now determined to build something big. 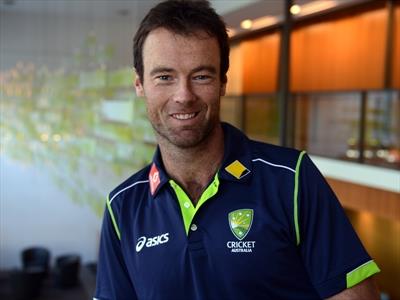 A 30-year-old carpenter’s apprentice, Rob Quiney admits he’s crawled through a small window of opportunity and he’s now determined to build something big.

Hoping to follow in the footsteps of fellow late-blooming left-hander Mike Hussey, Quiney believes his experience can see him hit the ground running in his Test debut against South Africa on Friday.

The Victorian opener will slot into No.3 in the inconsistent Australian top-order at the Gabba after being called in to replace injured allrounder Shane Watson.

Quiney has won his spurs on the back of two consistent years of Sheffield Shield performances, topped off by player of year honours last season plus 85 for Australia A against the Proteas’ high-quality pace attack at the SCG.

Despite turning 30 in August, and previously being viewed as a hard-hitting white-ball specialist, he never gave up on the dream of playing for Australia after just missing out on debuting for the Twenty20 side in 2009.

“No, I guess my last two years were my most consistent and I thought there might be a little window, over 12 or 18 months, where I could try and get my foot in and I’ve needed to continue to make runs,” Quiney said.

“We’ve seen in the past Mike Hussey is probably the greatest of them all but when Marcus North first came in he started pretty well as well.

“Only time will tell but I’m hoping my maturity will help me.”

Quiney beat younger men Phil Hughes, Usman Khawaja and Alex Doolan to the post after the national selectors opted for a specialist batsman to replace Watson.

Coach Mickey Arthur described the Victorian as the stand-out domestic player in the land and felt the match-hardened stalwart was tailor-made for an intense heavyweight battle.

“You can’t blood a youngster against a team like South Africa. We want a guy that’s very confident in his ability and knows his game backwards.”

Quiney’s selection, plus Australia’s confidence Watson can return for the second Test at the Adelaide Oval, heaps extra pressure on dogged opener Ed Cowan, who is averaging 29.83 from seven Tests.

“There’s no secret that we’ve looked to increase our depth pool with our top six,” Arthur said. “If (Quiney) has success he’ll obviously keep his place.

While showing form against Proteas new-ball duo Dale Steyn and Vernon Philander on the dead SCG track, Quiney is looking forward to also combating them at the pacey Gabba where he smashed 119 in an interstate one-dayer last month.

“I’m sure as a pace unit they will be licking their lips at a quicker wicket than Sydney,” he said. – AAP