Watson keen to cash in with bat in India

Shane Watson says not bowling on the Test tour of India should be a boost for his batting form. 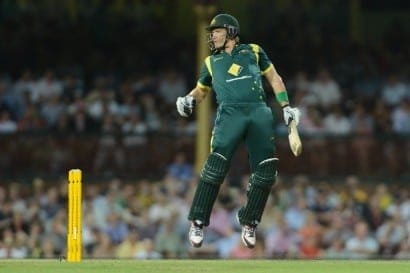 He’s waiting to see if he gets put back to his favoured opening role for the first Test against India in Chennai on Friday.

But he says if David Warner (fractured thumb) is passed fit to play, he’s likely to bat at No.4 behind Warner, Ed Cowan and Phil Hughes like he did in the Boxing Day Test against Sri Lanka.

That was before injury struck the 31-year-old again – which brings us to the other reason he’s waiting.

The two-time Allan Border Medallist is also waiting to resume his role as seam-bowling allrounder, but he says he’s taking it slowly and has ruled out bowling in the four-Test series in India.

“It’s nice to be able to open the batting,” Watson told AAP after scoring 84 at the top of the order in Australia’s three-day game against India A in Chennai.

“It was something I’ve been looking forward to, opening the batting like I have in my comeback so far (including scores of 122, 76 and 0 in the last three one-dayers against the West Indies in Australia earlier this month).

“Playing in India is a really big challenge, especially against the reversing ball and the turning ball.

“I certainly do love opening but I also totally understand that I’ve got to fit into the best position for myself and the team as well.”

Watson, whose batting form can dip sometimes depending on his bowling loads in Tests, says he’s determined to fight his way back to being a valuable contributor in both disciplines.

“There’s no doubt I will get back to (bowling), maybe in a smaller scale over the next six months,” he said.

“But in the short term, I’m just trying to stay fit and try to bat for a few months without getting injured to try to get some improvement and continuity.”

Two Test centuries is a statistic that has been thrown back at Watson in the past and his poor conversion rate is an issue for some but, for others, his consistency in getting starts indicates his value to the side, with 19 half-centuries in 38 Tests.

The NSW allrounder says not bowling in the Indian series will help his batting.

“There’s no doubt there’s a big difference. Even on Saturday not bowling, mentally it keeps you very fresh (for his innings on Sunday),” he said.

“Hopefully throughout this Test series, I can show how much of a difference it does make.

“My major goal is to be able to build up enough bowling so I can provide the role during the Ashes.” – AAP