Australia took two wickets in the opening session of the second Test on Thursday, but face a mini-injury crisis against South Africa in Johannesburg. 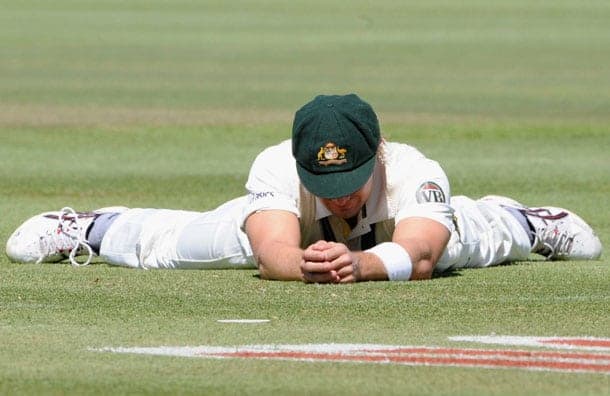 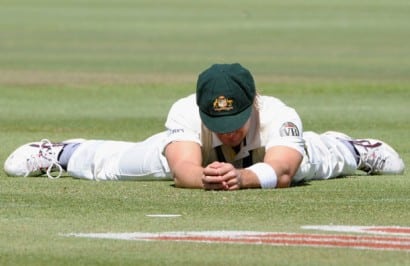 AUSTRALIA took two wickets in the opening session of the second Test on Thursday, but face a mini-injury crisis against South Africa in Johannesburg.

After winning the toss, South Africa powered to 2-107 at lunch, largely thanks to a blistering unbeaten 43 from 33 balls from Jacques Kallis.

Spearhead fast bowler Ryan Harris was scratched before play with a hip problem and he is being immediately flown back to Australia for further treatment.

No.3 batsman Shaun Marsh had already been sent home on Monday with back stiffness.

Then in the middle of the 19th over of the second Test, star all-rounder Shane Watson strained his right hamstring and was forced from the field.

Early indications are the fast wicket and lightning-paced outfield at The Wanderers will suit the batsmen.

If Watson doesn’t return, there will be all sorts of pressure on the remainder of an already depleted attack to take all 20 wickets required to win the match.

Despite Harris’ withdrawal, the day started on a positive note with 18-year-old Pat Cummins becoming the youngest Australian to debut since 1953.

Cummins (0-17 from eight) failed to take a wicket in the opening session but consistently bowled at a brisk 145km/h.

Australia are fighting to square the series after their eight-wicket humiliation against the Proteas in the first Test at Cape Town.

The best performers in an otherwise dismal Test for Australia were Michael Clarke, Shane Watson, Ryan Harris and Shaun Marsh.

At lunch on day one, Clarke is the only one of those four left on the field.

The Australian camp say it’s difficult to know the severity or likelihood of Watson returning at this stage.

Had Harris been fit to play, it’s possible Mitchell Johnson may have missed out on selection altogether.

But eager to prove his worth to the Australian side, Johnson (1-40) claimed the early wicket of one of his great personal rivals, Graeme Smith (11) in just the seventh over caught at slip.

South Africa steadied before Watson (1-13) struck in the 15th over to have Jacques Rudolph caught behind for 30.

The vice-captain had the ball moving nicely but midway through his fourth over injury ended all that.

Hashim Amla is the other not out batsman on 14.

He faced more than 30 balls to get past one, but the century-maker from the first Test played the perfect support role in a valuable 50-run partnership with Kallis.

Kallis’ knock included a four and a six off Nathan Lyon (0-12 from one) in the last over before the break.