Wallabies want to join with All Blacks for Anzac centenary match

Wallabies players have thrown their support behind a proposed Anzac tour of the northern hemisphere in 2015, to commemorate the centenary of Australian and New Zealand troops landing at Gallipoli. 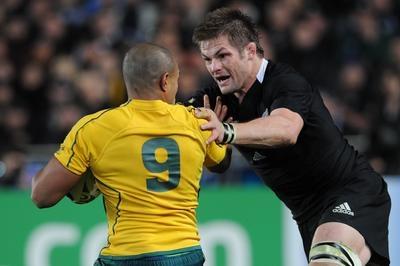 WALLABIES players have thrown their support behind a proposed Anzac tour of the northern hemisphere in 2015, to commemorate the centenary of Australian and New Zealand troops landing at Gallipoli.

ARU boss John O’Neill revealed on Wednesday his visions for a combined Wallabies-All Blacks team which he hopes could play the British and Irish Lions at Twickenham in three years time.

There was a buzz at Wallabies camp on Thursday following O’Neill’s comments, with the likes of winger Digby Ioane relishing the thought of lining up alongside Sonny Bill Williams, and halfback Will Genia excited by a prospect which could see him partner Dan Carter in the halves.

An Anzac team played against the Lions in 1989, but the concept failed due to a lack of support from players during the amateur era.

But several Wallabies expressed their desire to one day play in such a match and said Australian and New Zealand players would jump at the chance.

“Guys would look forward to that and aim to get into that team,” said Wallabies No.8 Wycliff Palu.

“A lot of people would like to watch it and guys would like to be a part of that squad, so it’d be good for rugby if it gets off the ground.”

Drew Mitchell, who is on track to return for the Wallabies during the Rugby Championship, said representing the Anzac tradition 100 years after Gallipoli would be an honour.

“It would mean a hell of a lot to all involved,” said Mitchell, who likes the idea of it being more than a one-off occurrence.

“It’s for people higher up the food chain than me to sort out whether it’s a year-in year-out thing or if it’s something like the Lions where it’s every four years and it’s a different country each time … but because there’s so much history between the two sides on the rugby field and off, it makes a fair bit of sense.

“You wouldn’t find too many hands not being put up for that selection.” – AAP

What do you think? Is it a good idea? Who would be in your ‘Anzac’ team? Tell us below: