The 2012 London Tag Rugby Championship winners, Tumeke, have started 2013 on a high note, adding another trophy to their collection with the 2013 Rugby Rocks Tag Rugby Festival title. 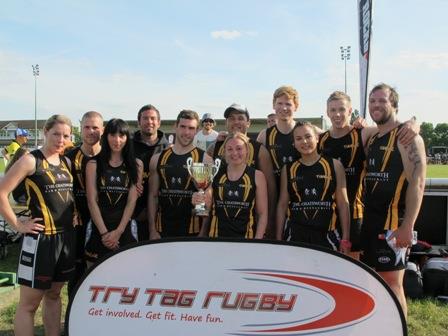 THE 2012 London Tag Rugby Championship winners, Tumeke, have started 2013 on a high note, adding another trophy to their collection with the 2013 Rugby Rocks Tag Rugby Festival title.

After claiming the inaugural Hog N Ale Tag Rugby Festival title at London Irish’s home ground in Sunbury on 4 May, Tumeke earned their second one day festival trophy of the year, defeating Kick Tease 5-1 in the Cup final on Sunday 2 June.

Jarrod’s Dating Dino’s were too strong for the Fulham Foxes in the Plate final, coming out on top 5-2. The Chipper Rippers of Fulham claimed the Bowl final with a 4-1 victory over Rock Heroes.

The Rugby Rocks Tag Rugby Festival, now in its second year, was won by The Chargers in 2012. Tumeke now have their eyes set on the Pig N Porter Tag Rugby Festival in Limerick, Ireland on Saturday 13 July. This festival is the biggest tag rugby festival in the world, with over 120 teams competing for the â‚¬1000 prize money up for grabs.

The tag rugby community has been said to be a home away from home for many and Try Tag Rugby place a big emphasis on connecting people together, creating a sense of community spirit and expanding people’s social networks.

At the Rugby Rocks tournament in Richmond, Try Tag Rugby also entered teams in the Rugby 10s and Netball events. The rugby and netball teams were made up of tag rugby players across the 15 competitions in London, coming together to represent the tag rugby community.

The Rugby 10s team did exceptionally well, making it all the way to the final. The netballers also achieved amazing results, going through undefeated in the pool stages only to bow out in the A grade quarter finals to established netball side, Lavender Hill.

If you would like to join the growing London tag rugby community, Try Tag Rugby’s summer leagues commence from 24 June onwards at 15 venues across London and Reading. Due to the successful Fulham league which sold out in its first season, Try Tag Rugby are introducing a second evening (Tuesdays) at Fulham.