The AFL London top four is signed and sealed with one home-and-away round remaining after North London Lions belted the Swans to secure the fourth spot. 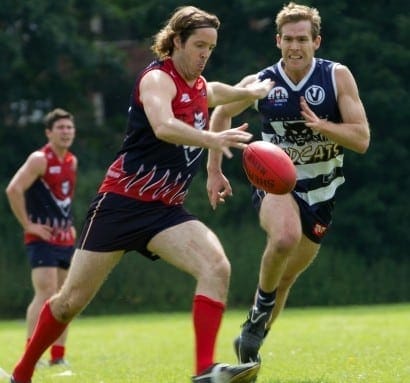 By Lee Crossley
THE AFL London top four  is signed and sealed with one home-and-away round remaining.

North London’s 28.9 (177) to 4.3 (27) win over London Swans at Bounds Green spelled the end of the latter’s campaign this year, while securing North a final’s berth.

Wandsworth, last year’s runner-up, will finish on top ahead of Putney, West London and North.

The Demons will meet Putney in the second semi-final on 4 August at Motspur Park for a chance to go straight into the Grand Final, while West London and North London will have to take the long route to the Grand Final by contesting the sudden-death semi the next day.

Wandsworth, no stranger to finals action, seem to be making all the right noises again at the business end and look set to again have a big say in who will take out this year’s prize.

The Demons trailed West London by nine points at the last change on Saturday at Barn Elms before storming home with a seven-goal-to-two final term to win 12.6 (78) to 8.6 (54) and hand their arch rival their third defeat of the season.

“To come from behind and overrun them on a hot day was really pleasing,” Wandsworth coach Jarryd Browne said.

“I think our fitness, due to the fact we use Clapham Common really well for training was a key factor in getting us over the line.

“We had two players didn’t show up at the start which left us with only two ROWs on the bench and then we lost our ruckman Matt Tucker in the first quarter with a knee injury so the boys needed to dig deep and they did.”

Browne said the Demons will be approaching their trip to Bounds Green on Saturday with caution with the Lions starting to turn a few heads in recent weeks, prompting talk they may be the dark horse come finals time.

“There’s every chance we could play them again in the finals, either in the prelim or the Grand Final, so we won’t be taking this one lightly.

“The trip to Bounds Green coincides with the start of the Olympics so we might have to leave Wandsworth on Thursday to get there on time!”

The Magpies host London Swans on Saturday in a dress rehearsal for their semi against Wandsworth.

West London take on Wimbledon at Motspur Park in the other match.

The top four is settled in the Conference division, too, but the order of teams could change depending on Round 10 results.

Shepherds Bush, gutsy winners over Clapham on Saturday, will finish on top but Clapham could steal second from Regents Park Lions if they beat them at Bounds Green on Saturday.

Hammersmith Magpies have stitched up fourth and will play the loser of the Demons-Lions clash in the knock-out semi.

In the Social division, Wandsworth and Putney will compete in the second semi for a Grand Final spot, while it will be a West v North London first semi.

Motspur Park will host three weeks of finals, however negotiations are continuing with council to get access for the fourth weekend with back-up plans of potentially using Bounds Green being considered.

Read more: Bulldogs and Power to light up London in AFL exhibition