The year in Australian cricket: Our 2012 Top Ten

The end of the year is a good time to reflect on the past 12 months, and for the Australian cricketing fraternity it has been a topsy-turvy 365 days. Counting down, here are our top ten events in cricket this year.

by Matt Parton
in Sport 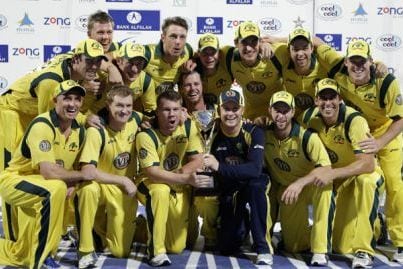 THE end of the year is a good time to reflect on the past 12 months, and for the Australian cricketing fraternity it has been a topsy-turvy 365 days. Counting down, here are our top ten events in cricket this year.

In 2009 Mitchell Johnson was ICC world player of the year, strike bowler in the Australian tour of England, and made his solitary Test century with the bat. Since then he’s been absent, in and (mostly) out of the national side after being taken apart in the dismal 2010/11 Ashes loss.

With another Ashes series around the corner, and considering how the Poms have towelled him up in the past, it will be interesting to see if Johnson can keep up his form in 2013 against England.

The big story of this series between India and Australia was supposed to be the Little Master’s farewell tour of Oz but during the series the Australian team put any sentimentality aside to crush him and his countrymen 4-0.

Michael Clarke began his stellar run in this series and Sachin Tendulkar for his part managed a top score of 80 in his eight innings.

Against the West Indies Matthew Wade made an innings high 106 in the third Test of the Frank Worrell Trophy. Australia won the match by 75 runs and Wade’s effort in part allowed Australia to close out the series. As a result he has cemented himself in the box seat for this key position.

For the first year since Shane Warne retired one specialist spin bowler has been used in every Test for a calendar year. At only 25 years old, and with a pretty good average of 30.96 with the ball, Nathan Lyon looks well placed to hold on to the spot for some time to come. Shame he’s as boring to watch as paint drying.

Six: Spin me right round baby.

After the Boxing Day Test in 2012 Cricket Australia sports scientists warned the selectors that James Pattinson shouldn’t be picked as he had played too much cricket. He played, got a stress fracture and has been out for most of the year.

The fallout has been that we have used eight fast bowlers this summer and look set to keep the rotation happening. Love it or loathe it, so long as we keep winning, fast bowler rotation is here to stay.

It may be hard to believe, but after thrashing India at home and the West Indies away Australia had an opportunity in the recent series against South Africa to overtake them for the number one Test ranking.

Now no one really knows or cares how Test rankings are calculated, but being number one would mean that England can’t be, and that would have been a reason to celebrate. Unfortunately we’re still behind them.

In most years Michael Clarke’s efforts would be considered a shoe-in for the number one spot on this list, so you have to feel for him a little bit.

He has amassed 1544 Test runs – the most ever for an Australian in a calendar year. He has notched up more double centuries than anyone ever has before, and achieved it all at an average of 106. On top of that he’s led Australia to the precipice of the number one Test ranking. The cream on his social life cake is that he dropped the tabloid prone Lara Bingle and married Kyly Boldy. Well done mate.

With Hussey gone, the big question on everyone’s lips will be: “Who will lead the team song?”

That’s right, for the past few seasons Hussey has been the man to turn to in a clutch team song situation and with the rotation policy for bowlers in full swing and an equal dearth in the batting line-up, who will be in the team long enough to learn the words?

Seriously though, Hussey’s retirement marks the last of the golden era players to leave the team: a great loss.

The first cricket I really remember following closely was the 1996/97 series against Sri Lanka. This young kid called Ponting comes out, survives an onslaught from a first rate attack and makes it to 96 before getting himself out, LBW.

On debut, this was an astounding innings. From then on I was hooked on his career and, for many of us, he encapsulates the golden era of Australian cricket. It may be hard to believe considering the three Ashes series defeats but he was still the most successful Australian Captain in Test history and also took us to victory as Captain in the 2003 and 2007 ODI World Cups.

Oh, and he’s also the highest ever Australian run scorer and equal with Steve Waugh in terms of Tests played. Pretty impressive stuff.

The tragic passing of Tony Grieg, aged 66 of a heart attack, only just makes it into the 2012 list. He had been receiving treatment for lung cancer but despite this the death was still a shock, with Bill Laurie saying on air he was planning on visiting him in hospital during the Boxing Day Test.

Tony, along with the rest of the commentary team, have been a big part of my summer for the last 20 odd years and his strong South African lilt exclaiming “he’s got that right out of the meat of the bat” will be a much missed catchphrase.

So that is our top ten list for Australian cricket for 2012. Are there any events you think we have missed? Leave your comments below.