Mart Paradisis has taken out the award for the biggest wave in Australia at Surfing Life Oakley Big Wave Awards. Check out footage of his ride on the 9 meter wave below. 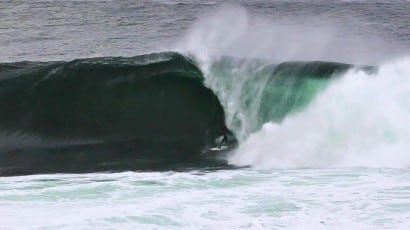 Tasmanian big wave charger Marti Paradisis has taken out the Biggest Wave of 2012/2013 in Australia at the Surfing Life Oakley Big Wave Awards last night. Paradisis was up against tough competition, but managed to win with a 9-meter monster at Pedra Branca Rock in the icy waters of Tasmania.

Paradisis had previously won all other categories of the Australian Awards night, but had never clinched biggest wave of the year till now. He took home $20,000 for his daring efforts.

“It’s a huge thrill,” Marti said of the Big Wave Award and the ride that generated it.

“I’m so stoked to be able to represent the (Tasmanian) crew up here.

“I wouldn’t get to ride waves like this without a lot of help so this isn’t just for me.”

Check out the video below: