London Swans have made a last-minute bid to be included in this year’s AFL London finals series action with a stunning 52-point upset over West London Wildcats on Saturday at Ply Park in Shoreditch. 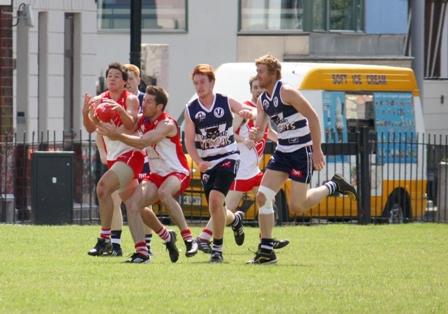 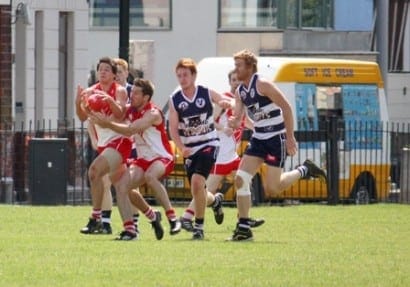 By Lee Crossley
LONDON Swans have made a last-minute bid to be included in this year’s AFL London finals series action with a stunning 52-point upset over West London Wildcats on Saturday at Ply Park in Shoreditch.

A loss on Saturday would almost certainly have consigned the Swans to another year on the AFL London scrapheap, but the 14.10 (94) to 5.12 (42) win keeps their previously fledgling finals hopes alive.

They would have taken outright fourth, had top side Putney beaten North London as expected.

But the Lions produced an upset of their own, toppling league leader Putney by 19 points at Bounds Green.

Saturday’s results have again thrown the finals race wide open in what has been the most even competition in recent years.

Five teams — Wandsworth, Putney, West London, North London and London Swans — are jostling for four spots with the order of the four also a mystery.

Only Wandsworth and Putney appear to have booked finals berths, while it’s a race in three (West, North and Swans are all locked on three wins) for third and fourth.

The Swans’ percentage is so small they must win one more than the other two to make it.

Swans president Chris Angus said the wins (Swans also beat the Raiders by 19 points in the conference game) have rejuvenated the whole club.

“If we lost then it would be been hard to keep the boys interested for the last three games,” he said.

“But wins in both games has kept us in the hunt and gives us a big reason to keep pushing ourselves to make the finals.

“We’ve never done the double against West London so that’s a great achievement for us given the stamp they’ve had on the competition for a long time.

“That’s important for us from a belief and confidence angle for both sides.”

Two massive games — against Wandsworth and North London — await the Swans after the bye weekend.

“We play against sides we are competing against for finals spots in the run home so it’s in our hands now,” Angus said.

“If we win all the games then we’ll probably go through. It’s nice not to be worrying about other results.

“It’s important for the competition that’s it’s so tight. If we’d dropped yesterday, the four would have been settled and the season just drags out.”

While conditions at Shoreditch weren’t ideal — a strong breeze favoured one end all day — at least the sun provided some respite from the constant drab greyness we’ve been served up lately.

Swans captain Leigh Hogan provided the first surprise of the afternoon, winning the toss and opting to kick into the wind.

Perhaps Hogan knew something the rest of us didn’t for the Swans booted seven goals to zip to set up a 43-point lead at quarter-time.

From there, it was an arm wrestle, with the Swans booting another seven goals to the Cats’ four for the rest of the match.

Hence, it’s fair to say the Swans set up their win with that dominant first term that simply left the Wildcats stunned and unable to recover.

Full forward Trav Brand proved too much of a handful for the Wildcats’ defence, booting six goals after his haul of eight in Round 6.

Mick Lewis, with VFL experience with North Ballarat, gave the Swans a 60m advantage with each kick, his raking left boot the source of many attacks on goal from defence.

The Swans had winners everywhere — Scott Thomas and Chris Laidlaw proved too strong a combination for Trent Dunlop who shouldered the Cats’ ruck duties all day.

And then there was the EU factor — London again winning this contest, the highlight provided by a 55-metre Will Green goal after evading three Wildcats.

The day began with the Swans posting a 14.8 (92) to 11.4 (70) Conference win over the Raiders with Swans skipper Tommy Butlin dominating with five first-term goals and seven for the game.

The Cats, with three wins and strong percentage, now find themselves in the company of North London and the Swans, who also have three wins but inferior percentage.

At this point of the season, on form, they are no certainties to make the four and the Cats will need a major shift in momentum in the run home. They’ll finish the season without rover Dave Taylor — as the 2011 Grand Final medallist played his last game for the club on Saturday.

The Magpies went in firm favourites after knocking off Wandsworth last week but a week’s a long time in football.

Both teams were missing plenty of players: the Lions went in with an unrecognisable forward line, while the Putney recruiting campaign via Facebook was in overdrive during the week.

The Lions kicked with the breeze in the first quarter and led by three goals at the main break and 20 points at the last change.

The Lions kicked two goals against the breeze in the final term to get home by 19 points.

The Magpies , after experiencing a big mid-season purple patch that saw them beat Wandsworth and join them at the top of the ladder, face a tough test to maintain a top-two spot after losing several key players including Pete McGettigan and Lachlan O’Toole.

Clapham Demons were challenged all day in their conference match against SE London Giants but prevailed to win 6.7 (43) to 5.5 (35).