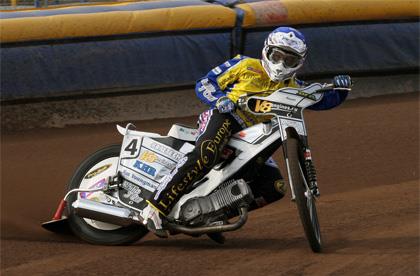 MOTORBIKES themselves come with an inherent sense of danger, but when you take away brakes and gears — the essential components used in stopping — you really are asking for trouble.

However, for Australian rider Cameron Woodward, the drive to win overrides these fears, the same fears that keep most of us well clear of a motorbike let alone a race track. For Cameron, this is the appeal of Speedway and it has led him, and a number of other Aussies, to regularly travel to the UK to compete in the highly competitive UK Speedway competition.

“Speedway is raced on an oval dirt circuit in stadiums. Each race has four competitors. Races consist of four laps with the average track being around 300m plus,” explains Cameron to Australian Times.

“[It involves] really close elbow to elbow action, short races that are run and won in about 1 minute.”

Speedway racing is not for your everyday average motorbike rider. The catch is you have no breaks, no gears and are sitting on an alcohol fuelled machine that matches an F1 for initial acceleration.

To make it around the bends of the track and control the bikes speed — essentially stop it going at 100km into the wall — riders have to put the bike into a controlled slide, using a combination of their leg and acceleration to survive the corner.

The UK scene suits Cameron, as the professionalism of the UK circuit allows him to follow his passion full-time.

“We are able to race as professionals here, as the money is better and the meetings are far more frequent. So I prefer here. I’m a plumber when I’m home. ”

Cameron spends only three months of the year back in Australia and feels the UK is now his permanent base.

“At the moment I live here for nine months of the year, pay tax and have a great friendship base.”

Having come to the sport at the early age of 12, Cameron has now clocked up years of experience since he first started riding in Mildura, Victoria. Cameron competes in Speedway and Longtrack – an individual form of the sport – in the UK, Poland, Germany, France, Holland, Finland, Norway and Italy.

This year Cameron hopes to win the World Longtrack Championship, as well as the Speedway World Cup with Australia, and to further his success with the Eagles.

“I have spent all my money on great bikes and surrounded myself with the best people. Everything is crossed for a great season.”

Cameron will compete throughout the UK this year with Eastbourne as part of the Sky Sports Elite League.

If you want to check out this fast-paced adrenaline fueled sport for yourself, see www.eastbourneeagles.co to find out where and when the Eastbourne Eagles are racing.