South Africa have rained all over Ricky Ponting's parade to consolidate their No.1 Test ranking and hand Michael Clarke his first series loss as Australian captain. 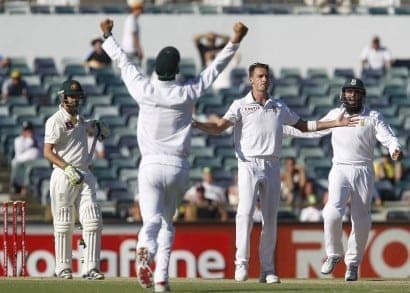 SOUTH AFRICA have rained all over Ricky Ponting’s parade to consolidate their No.1 Test ranking and hand Michael Clarke his first series loss as Australian captain.

Australia came to Perth with high hopes of stealing the world’s-best crown from the Proteas and sending Ponting out on a high, but they were instead given a rude reality check ahead of next year’s Ashes battle.

After bowling South Africa out for 225 in the first innings, Australia were set a world record chase and found themselves on the end of a hiding.

Australia were bowled out for 322, giving South Africa an emphatic 309-run win with more than a day to spare, after they belted 569 in their match-winning second dig.

Hashim Amla (196), AB de Villiers (169) and Dale Steyn (six wickets for match) rose to the big stage in Perth. But the foundations for South Africa’s second straight series win on Australian soil were set when the Proteas denied the hosts victory in the second Test with a gutsy final-day batting display in Adelaide.

Clarke had a special series with the bat, but after more than 18 months as an undefeated Test skipper, he was forced to contemplate how it all imploded so badly on day two.

Ponting’s decorated career came to an end when he was out for eight in the over before lunch.

It wasn’t the fairytale he was after, but the respect shown to him by the South African players summed up what an immense figure Ponting has been for Australian cricket.

The Proteas formed a guard of honour to welcome the retiring former captain to the middle, and Ponting shook the hand of their skipper Graeme Smith.

Two boundaries to get off the mark raised hope that Ponting was in for the long haul, but his dismissal was as soft as they come.

He was caught by fellow great Jacques Kallis at slip attempting a cut off Robin Petersen (3-127).

South African players rushed to congratulate Ponting as he walked from the field, and the game’s second highest run-scorer stopped at the rope to acknowledge the fans.

Ponting exited at 3-102, and Australia were in a downward spiral from there.

Ed Cowan ground out a gutsy 53 before holding out in the deep after a loose pull shot off Steyn (3-72).

Clarke (44) and Mike Hussey (26) had combined for partnerships of 272 and 228 in Adelaide and Brisbane respectively, but hope of a miracle was ended when Clarke was stumped for 44 to become Petersen’s latest victim before tea.

Clean-hitting Mitchell Starc, who added an unbeaten 68 to his second innings six wicket haul, combined with Nathan Lyon (31) to put on a WACA record final-wicket stand of 87 to prolong the inevitable.

The writing was on the wall from the second ball of the day when after Australia resumed at 0-40, Vernon Philander (2-41) had David Warner (29) caught behind.

The unsung hero for South Africa was Adelaide game-saving century maker Faf du Plessis, who made 78 in the first innings.

Otherwise, South Africa wouldn’t have taken the vital 62-run first innings lead they found themselves with when Australia were later rolled for 163 on day two.

Ponting said he hadn’t had time to gather his thoughts on an amazing career that saw him finish equal with Steve Waugh (168) for most Tests for Australia.

“I haven’t had a chance to reflect yet, been too caught up in this Test match,” Ponting told Channel Nine.

“But I’m sure I will over a few beers with the boys tonight.

“I prided myself on my ability to perform in big matches and … (since I haven’t been able to do that anymore) the writing has been on the wall for me.”

Captain Clarke called on Cricket Australia to keep Ponting involved in the game.

“What a sad day it is for Australian cricket to lose such a great player,” Clarke said.

“What a player, one of the greatest players I’ve played with. People who have played against him say exactly the same. The team wishes him all the best.”

“This Test showed why they’re the No.1 team in the world,” he said.

“(Adelaide draw) took it out of us mentally, physically. South Africa deserve a lot of credit, they hung on in that Test match.”