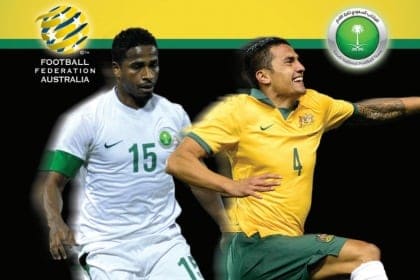 Australia’s Socceroos recorded their second win under coach Ange Postecoglou with a 3-2 defeat of Saudi Arabia at Craven Cottage in London.

The Socceroos went 2-0 up in the first six minutes of the football friendly, thanks to goals by Tim Cahill and Mile Jedinak.

After Saudi Arabia’s Hassan Muath pulled one back on the 70 minute mark, Aussie debutant Baily Wright slotted home six minutes later to put some air back between the two teams.

But there were nervous moments as Saudi Arabia fought back to within a goal after half-time, and again after young defender Bailey Wright scored on his Socceroos debut.

It was frantic from there to the finish with Taisser Al-Jassam putting the Saudis within reach again 7 minutes from time, but Ange’s boys managed to hold on.

Postecoglou made four changes to the starting line-up from the side that lost 2-0 to Belgium last week, including 22-year-old Wright making his debut along with Massimo Luongo. Mitch Langerak replaced Mat Ryan in front of the goal.

It was the Socceroos’ first win since their first outing under Postecoglou in their 1-0 win over Costa Rica. The following five straight losses was a record run of defeats, although they were against the likes of Holland and Spain in the World Cup.

This friendly in London and the game against Belgium were a chance for Postecoglou to refine his team ahead of the Asian Cup in January, which will be hosted in Australia. Based on these two games though, there is clearly still work to do.