Australian snowboarder Scotty James failed to progress to the finals of the slopestyle competition. 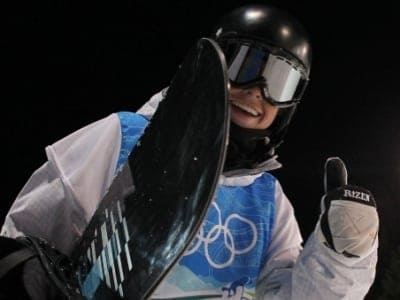 Australian snowboarder Scotty James will turn his attention to the halfpipe after missing out on qualifying for the finals of the slopestyle on the first official day of competition at the Winter Olympics.

James, who hurt his “man parts” and chest during the first run of pre-qualifying on Thursday, admitted he talked about pulling out of slopestyle to concentrate on the halfpipe.

He decided to forge ahead though, aiming to finish in the top four riders to progress to the 12-man final in the afternoon.

His initial run on Saturday was clean enough – if a little conservative on the rails section – but, after sitting in the cut-off zone early in the heat, he dropped back to sixth by the time it was complete.

Needing a pointscore well into the 80s on the second run, he just didn’t get the speed on the top section after mis-timing a 360 and his event was effectively over after the second and third rails.

He finished eighth, which will place him 16th in the event overall.

James said he’d been getting docked points on the rails and knew he had to step things up.

“I thought my score should’ve probably been a little bit higher in my first run but I am happy overall,” he said.

“I came here to do exactly what I did so there’s no sad faces on me today. I’m super happy.”

He’s hopeful of being in better condition for his stronger event, halfpipe, which is on Tuesday.

“I’m a little bit injured in my chest … I could’ve not ridden tomorrow and just sat it out and waited for the ‘pipe but there was absolutely no way I wasn’t going to ride today,” he said.

“I wanted to come out here and achieve what I set out to do and that was to put my triple (three flips) down in competition and I did it so I’m super stoked.” – By Glenn Cullen