Slater wins out over Parkinson at Quiksilver Gold Coast Pro

Surfing’s reigning World Champion, Australian Joel Parkinson, was unable to hold off a challenge from Kelly Slater in the final of the Quiksilver Gold Coast Pro. 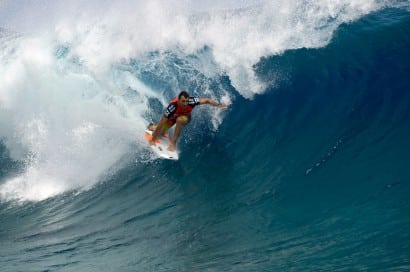 SURFING’S reigning World Champion, Australian Joel Parkinson, was unable to hold off a challenge from Kelly Slater in the final of the Quiksilver Gold Coast Pro.

Despite two sensational eight plus rides by Parkinson it was not enough to keep the US challenger at bay. The two fought it out in 3-5 foot barrelling Kirra Beach in front of a massive Gold Coast crowd.

11-time world champion Kelly Slater produced an amazing 9.93 ride, following an 8.73 wave. They were scores Parkinson was unable to match, even with local support backing his efforts.

Slater said he was glad to have secured the first win of this year’s world title tour after defeating Aussie Mick Fanning in the semi-final.

“They’re all important but it’s nice to get off to a good start,” said Slater.

“Momentum shifts throughout each season and a lot can happen.”

Slater acknowledged it was shaping up to be a tough tour, with the top three seeds all finishing in the top three of the event. Parkinson, Slater and Fanning ended the world tour last year as numbers one, two and three respectively.

Parkinson had looked unbeatable leading into the final, having put on a clinical display of tube riding at his home town break of Kirra during his semi against fellow Aussie Matt Wilkinson.

“I appreciate all the local support out here today and runner-up is a good start to the season,” Parkinson said.

“When Kirra is doing what it’s doing out there today, it doesn’t feel like an event.”

The world tour will now move onto Bells Beach in Victoria for the Rip-Curl Pro, the last of the two Australian events on the tour.