Shane Watson tops both the bowling and batting tables at the World Twenty20 and boasts four man-of-the-match awards. That makes him officially awesome, according to his captain George Bailey. And who can argue? 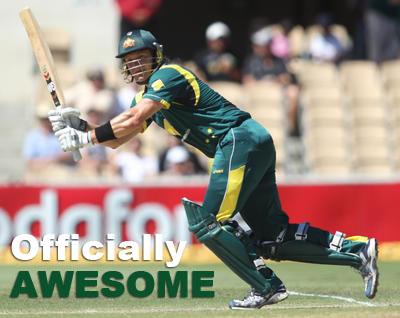 SHANE WATSON has a foursome of World Twenty20 man-of-the-match awards and he’s officially awesome, according to his captain George Bailey.

The skipper was asked after Australia’s eight-wicket win over South Africa on Sunday night if he could confirm rumours Watson had a Superman cape under his cricket clothes.

Australia restricted the No.1-ranked Proteas to 5-146 and reached 2-147 with 14 deliveries to spare to maintain their unbeaten record in the tournament.

Watson hit 70 off 47 deliveries and took 2-29. Left-arm spinner Xavier Doherty was the other big success story of the night for Australia with 3-20 after opening the bowling in his first game of the tournament.

If Pakistan beat Australia on Tuesday and India defeat South Africa, it would leave the Proteas with an 0-3 record in the Super Eights and the other three teams in Group Two on 2-1.

However Australia’s current run-rate of +1.72 compared to the other three sides at -0.426 or worse should get Bailey’s men to the semi-finals.

Australia’s batsmen will face the two most successful spinners in T20 International history on Tuesday – Shahid Afridi and Saeed Ajmal.

“I don’t know if you can decode him,” Bailey said.

“We’ve got some thoughts and we’ve got some ideas. But if he comes out and bowls unbelievably then it’s going to be a real challenge.”

“I’m running out of ways to describe his performances but it’s been so consistent and consistently awesome,” Bailey said.

“Tonight was the most impressive because they did bowl well at the start and he didn’t lose his head. He really constructed his innings.

“The way Xavier bowled at the start I thought he might have pipped Watto for man of the match but when he comes out and bats the way he does you can’t keep him out of the game.”

As ex-South Africa coach Mickey Arthur celebrated master-minding victory over his former side, Bailey said he was thrilled with Doherty’s performance after replacing medium-pacer Dan Christian.

Doherty had displayed a team-first attitude and kept his disappointment inside after being overlooked for the first three matches, Bailey said.

Doherty’s eventful month has included rushing back to Hobart from Colombo for the birth of his daughter Scarlett. However he was stuck in transit in Singapore when she arrived.

By Greg Buckle in Colombo