SA fight back to end second Test with a draw

Debutant Faf du Plessis has scored one of the most amazing centuries in South African cricket history to deny Australia a win in the second Test. 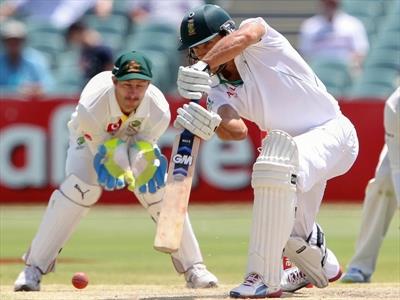 FAF du Plessis survived at the crease for more than seven and a half hours to post one of the great hundreds by a debutant and lead South Africa to a famous draw with Australia in the second Test.

South Africa batted for 148 overs, four and a half sessions and nine hours, at 1.67 runs an over to finish 8-248 and deny Australia a win they thought was in the bag.

Peter Siddle (4-65) gave his side everything at the death, but wasn’t able to get the two wickets required in the final over – his 33rd.

It seemed only a matter of time on Monday until Australia wrapped up victory and edged one step closer to stealing the Proteas’ No.1 ranking with a series win.

However du Plessis (110no), supported by AB de Villiers (33) and then Jacques Kallis (46), ensured Australia must win the third Test in Perth to usurp them at the summit of Test cricket.

What the day five heroics will do to the psyche of Australia, and for the confidence of South Africa, remains to be seen when everything goes on the line at the WACA starting Friday.

South Africa entered the history books, surviving the fourth highest number of overs to save a Test.

Australia paceman Siddle went through the pain barrier to give his side hope with a courageous bowling effort and spinner Nathan Lyon took 3-49, but it wasn’t enough.

It’s a shattering result for Michael Clarke and his men given the way they’d set the match up with a record-breaking first day and second innings target.

When Lyon had Jacques Kallis caught at bat pad with about 70 minutes left in the day, the end was in sight.

Siddle got rid of Dale Steyn (nought) and Rory Kleinveldt (3) with 12 minutes left in the day to bring out No.10 Morne Morkel (8no), but Australia couldn’t come up with the remaining two wickets.

The loss of fast bowler James Pattinson mid-match (side strain) proved to be a massive factor – and now Siddle will have a tough time backing up for Perth after bowling himself into the ground.

It was a nailbiting finish.

Fearlessly led by 28-year-old du Plessis, South Africa showed enormous character to fight it out to the death after Australia set them a world record fourth-innings target of 430.

Du Plessis arrived at the crease in the 21st over with the scoreboard reading 4-45.

He went on to face 376 balls, defy DRS reviews and watch his more high-profile teammates fall around him to carry his bat in an extraordinary display of concentration, technique and nerve.

Du Plessis survived three lbw reviews on Monday and a crucial dropped catch from keeper Matt Wade, who was standing up to the stumps to Ben Hilfenhaus (1-65).

The pair put on a patient 89-run stand from 408 balls before de Villiers (33 from 220 balls) was bowled by Peter Siddle shortly after lunch.

Superstar allrounder Kallis (58 and 46) defied a hamstring injury for the second time in the match to play a crucial role for his country.

His partnership with du Plessis was worth 99 runs.

Du Plessis was named man of the match, edging out double-century maker Clarke.

“There were so many emotions going through me. Through the 90s I had goose bumps all the time, I can’t put it into words,” du Plessis told Channel Nine.

“It was a very long day in the changeroom but it was just fantastic to watch how the guys went about it and did their work.

“A very proud day to be a Protea player.”

Despite the disappointment, Clarke said the Australians should hold their heads high.

“Two more wickets would have been lovely. A lot of credit has to go to South Africa,” he said.

“I think Faf was outstanding. An amazing effort, let alone on your debut.

“We threw everything at South Africa, credit to the boys I thought Peter Siddle was outstanding.