In a 'rematch' of the classic 2003 Rugby World Cup Final, the Australian Barbarians went down fighting to a classy England Legends side in London.

by Tim Martin
in Sport 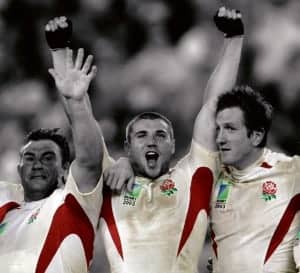 A DECADE on from the heartbreak of the legendary 2003 Rugby World Cup Final and England have done it again. Just like Jonny Wilkinson’s last minute drop-goal crushed Australian dreams at Telstra Stadium 10 years ago, the England Legends found it within themselves to conjure another thrilling victory, albeit at a far more sedate pace than the original encounter.
In front of almost 7,000 fans at London’s Twickenham Stoop, an England side featuring World Cup winners such as Jason Robinson, Steve Thompson, Will Greenwood and Jason Leonard beat a star-studded Aussie line-up 17-12.
Al Baxter’s Australian Barbarians started the better of the two sides and with uncontested scrums and lots of England dropped ball, Chris Whitaker – the former Wallaby, Waratah and Leinster half-back – fed the aging Aussie backline with seasoned aplomb. Australian rugby league and rugby union journeyman Andrew Walker, playing 10 for the Barbarians, looked as if he’d never retired and was a constant, menacing threat to the punishing England defence.
But England hardmen Simon Shaw and Ben Kay (both World Cup winners) showed no mercy to the Aussie attack and forced some valuable turnovers. With momentum swinging towards the hosts, it wasn’t long before electric winger Jamie Noon exploited his turn of pace to open the scoring for England after just 17 minutes.
Walker was sensational in the first half for the Aussies, jinking runs and flashy sidesteps beating many a man but his teammates were the walking wounded – wingers, centres and props galore all calling for the physio and the oxygen.
While there was a fair bit of rust on show and both teams guilty of spoiling great attacking opportunities, it was the try-scorer from the 2003 Final (and obvious crowd favourite) Jason Robinson who really brought the Stoop to life. His injection of pace and flair turned the game on it’s head and his 35 metre solo try just before the break had fans asking why he’d retired at all.
Battered and bruised, both sides headed into the sheds at halftime for a very well earned rest, with England ahead 12-0.
The second half saw the visitors up the tempo and it wasn’t long before they crossed the stripe themselves, some beautiful fends and offloads seeing Australia finally on the scoreboard.
Trailing 12-5, it looked as if the Aussies would have the chance to go level when Chris Malone produced an incredible intercept to race away down the field and offload to Ryan Cross, only for the former Sydney Roosters (and Waratahs and Western Force) man to be brought down inches from the tryline.
With the Australians fighting back, the match took on a tense and thrilling feel. However, every time England’s Robinson touched the ball, the crowd would come to life and choruses of ‘Sweet Chariots’ would feel the stadium.
The highlight of the night came around the 65th minute mark, with Steve Thompson (arguably the largest man on the field) and his 70m burst down the sideline to beat two Aussie defenders and score the match winner. While it looked as if Walker may have let the big man score, you had to give the former England hooker his moment of glory, especially as his post-try celebration involved a quick hit from the oxygen tank before skulling a pint.
With just seconds remaining and England in an unassailable lead at 17-5, it was Malone’s turn to produce some magic as he squirted through a hole in the English defence to race away and score an unchallenged and truly awesome try for Australia. But it was too little, too late. Just as it was 10 years earlier, it was England the victors once again, this time with a scoreline of 17-12. Robinson, named Man of the Match, was undoubtedly the difference between the two sides and still an incredible player to watch.
While it may not have been the result the Aussies were after, the match was a great success, giving fans and players a taste of the special rugby relationship between England and Australia and raising lots of money for rugby charities Restart and The Injured Players Foundation in the process.
Tags: Al BaxterAustralian sportHeathrow ExpressLegends matchMike RannRugby unionSportTelstra StadiumWallabies: Australia rugby union