Ricky Ponting went two years without a Test hundred and now the veteran has scored two in three innings in a strong response to speculation his best cricket is behind him. 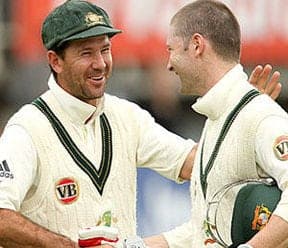 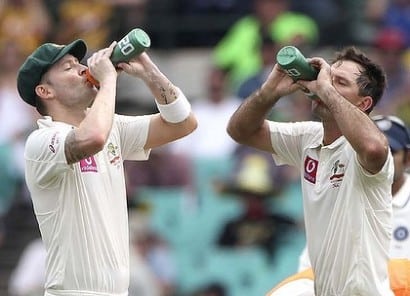 RICKY PONTING went two years without a Test hundred and now the veteran has scored two in three innings in a strong response to speculation his best cricket is behind him.

The 37-year-old hit 137 not out on Tuesday’s opening day of the fourth Test against India at Adelaide Oval to steer the home side to 3-335 at stumps, with skipper Michael Clarke scoring an unbeaten 140 on a flat batting track.

The 251-run stand between Clarke and Ponting was the pair’s second huge stand of the series after adding 288 in Sydney, where Clarke scored an unbeaten 329.

Ponting’s 41st century prompted a spirited waving of the bat to all parts of the ground and places the 162-Test veteran equal with South Africa’s Jacques Kallis, trailing only India’s Sachin Tendulkar (51).

“It just shows how much it means to him,” Australian batting coach Justin Langer told ABC Radio.

“I won’t be retiring at the end of this Test match,” Ponting told a news conference after being quizzed on his emotional celebration of his 41st hundred.

“How did I know I’ll come here and answer questions about my retirement?”

Ponting said it was always exciting to score a Test hundred, his second in three innings after breaking a two-year drought in the second Test in Sydney earlier this month.

“I haven’t scored a lot of those in the last couple of years which I have read a lot about lately as well,” grinned Ponting, who now boasts 400 runs at an average of 100.00 in this series.

“I want to be around to hopefully see this team climb up the rankings and if not be the number one-ranked side be very close to that.”

Unlike his 134 in Sydney, this time Ponting played with more of the style and daring that has defined his career, hitting 13 boundaries in five-and-a-half hours in front of 21,480 fans.

“I played better today than I did in Sydney,” Ponting said.

“It’s probably interesting to ask the same question about Sachin (Tendulkar) or (Rahul) Dravid or (Jacques) Kallis, the guys who are the same sort of age as me and who are still out there playing Test cricket.

“We probably all realise we can’t play the same way forever right through our careers.

“It’s not as if I’m striving for anything personally out of the game.”

Ponting said he still had a great thirst for self-improvement at training.

“That’s one of the things that is the difference between good players and great players,” Test cricket’s third-leading run-scorer said.

Ponting said there had been “negativity” from outside when he stepped down from the captaincy in 2011 about how it would work with him staying in the team.

“We’re both grown-ups. I know my place in the team … Michael is the leader now,” Ponting said.

“I don’t think there was anyone within … Australian cricket who had doubts about the way I am around to help the younger guys.

“I am around for advice if Michael needs it. I am not going to press myself on him.”

Clarke’s 19th hundred and fifth in 11 matches since becoming captain came off 133 balls. He has scored a stunning 519 runs in the series at an average of 173.

The skipper was dropped at second slip by a diving VVS Laxman off Ishant Sharma’s bowling on 133 in the first over with the second new ball.

Clarke was also given a life on 35 when a cut shot flew between second slip and wicketkeeper Wriddhiman Saha.

Using wonderfully quick footwork and batting for part of the day in his baggy green cap to the spinners, Clarke stroked 19 fours and one six from 188 deliveries.

Australia had raced to 98 at lunch for the loss of three wickets.

David Warner (eight) was lbw to paceman Zaheer Khan and Shaun Marsh was bowled between bat and pad for three, missing a straight one from offspinner Ravi Ashwin.

Marsh’s hesitant 12-ball display brings his tally for the series to 17 runs at an average of 3.40 and puts his immediate Test future at risk.

“Nobody is embarrassed. We are quite happy to keep coming and keep trying again and again and it will turn around sometime,” he said.

The home side will be anxious to push on to a big total, having scored more than 500 in their first innings against India in Adelaide eight years ago and losing the match.