Ricky Ponting may be considering retirement

The international career of former captain Ricky Ponting could be over after the 37-year-old was dumped from Australia's one-day squad. Meanwhile, coach confirms Wade is now the preferred keeper to Haddin. 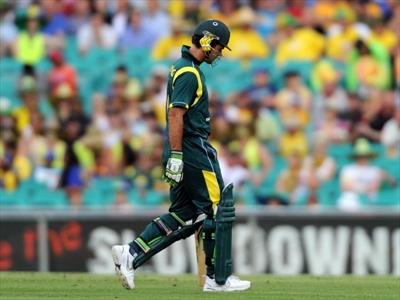 THE international career of former captain Ricky Ponting could be over after the 37-year-old was dumped from Australia’s one-day squad.

Just a day after standing in as skipper in Australia’s crushing victory over India at the Gabba, Ponting was informed his services in the one-day arena were no longer required.

Ponting’s tri-series return of 18 runs at an average of 3.6 against India and Sri Lanka proved to be his downfall, with the 37-year-old now considering whether it’s worth staying on in the Test arena.

National selector John Inverarity said it was unlikely Ponting would be able to force his way back into the one-day set-up given the need to prepare the squad ahead of the 2015 World Cup.

But he hoped Ponting would continue his Test career after the batsman’s stunning return to form in this summer’s 4-0 Test whitewash of India.

It is expected Ponting will hold a press conference to discuss his future in Sydney on Tuesday.

“Ricky is going to consider his future over the next couple of days and he’ll talk it over with his family and with his manager,” Inverarity said on Monday.

“He made a double century in his last Test match and we are hoping that he remains available for Test match cricket, but there can be no guarantees in elite sport and in the Australian cricket team.

“If he drops out of the ODI team then there’s a possible lack of momentum there.

“There are three Test matches in the West Indies (in April), then as I understand it there are no more Test matches until October or November.”

Inverarity described Ponting as a gem of a human being, and said the Tasmanian took the news of his dumping “on the chin”.

But he added the decision to axe Australia’s finest player since Don Bradman was a unanimous one.

“You don’t put your heart to one side, but the head has got to dominate,” Inverarity said of Ponting, who captained Australia to World Cup crowns in 2003 and 2007.

“In elite sport, there’s no place for sentiment.”

Haddin’s demise was poorly handled by Cricket Australia, who initially claimed the 34-year-old was rested for the start of the triangular series before later admitting he had been dropped.

The 43-Test veteran made a pair of ducks in NSW’s Sheffield Shield loss to Western Australia last week, and faces a fight to retain his spot in the Test XI ahead of Wade.

Meanwhile, skipper Michael Clarke is on track to make his return from a hamstring injury against Sri Lanka at Bellerive Oval on Friday after being named in Australia’s 13-man squad.

But fit-again allrounder Shane Watson, who also earned inclusion, is more likely to return against India in Sydney on Sunday.

In the other change to the squad, paceman Ryan Harris replaced Mitchell Starc.