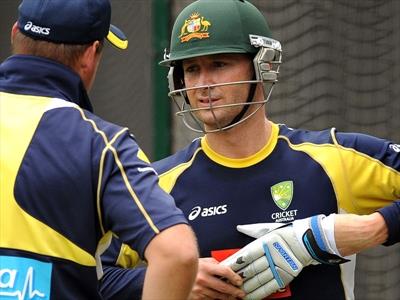 “I have a grade one hamstring strain so will be out of Friday’s game,” Clarke posted on Twitter.

Australia will be forced to name a replacement captain for the fixture against Sri Lanka at the SCG.

National selectors met Monday to pick another captain and the rest of the squad for the next block of one-day games.

The squad will be released late on Tuesday and selectors could turn to ex-skipper Ricky Ponting as Clarke’s temporary replacement.

Regular vice-captain Shane Watson only returned to grade ranks last weekend from a six-week absence with a calf injury.

While Clarke hoped to return for Sunday’s one-dayer against India in Brisbane, team physiotherapist Alex Kountouris was non-committal.

“(He) sustained a low grade right hamstring strain,” Kountouris said in a statement.

“I will assess him later this week and decide on his availability for the game in Brisbane on Sunday.”

Australia’s batting line-up also faces scrutiny with newcomer Peter Forrest making 66 on debut in Sunday’s defeat by India to bolster his chances of remaining in the squad.

“I know the selectors are meeting today so I’ll be sitting by my phone tomorrow (Tuesday) hoping to get a call,” Forrest told reporters in Brisbane on Monday.

“Yesterday was a great day and one I’m not going to forget.

“It was nice to contribute but it would have been a lot nicer had I got 80 plus or a hundred and got the side to a win.” – AAP