The story of the round was Putney Magpies breaking Wandsworth's unbeaten run to join the Demons at the top of the table and send a powerful message to the competition of their flag potential. 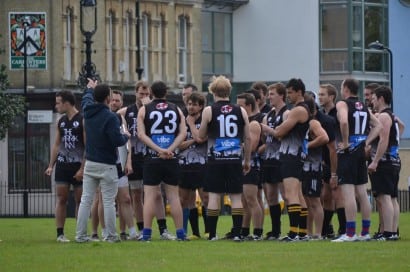 By Lee Crossley
Hackney Weekend plus Isle of Wight plus Ascot Races – AFL London clubs had been dreading Round 6 for some time.

But the show went on, leaving clubs to scrape together the best line-ups they could.

The story of the round was Putney Magpies breaking Wandsworth’s unbeaten run to join the Demons at the top of the table and send a powerful message to the competition of their flag potential.

Whether they can continue their golden run remains to be seen with key players either returning home or travelling over the coming months.

“But our depth has been great this year, which is why the club has been so strong.

“We’ve had a whole lot of new blokes so it’s a chance for some guys from the seconds to get an opportunity.”

The Magpies travel to Bounds Green to take on the Lions this weekend in another tough affair.

Then it’s the bye, followed by West London.

“We have to be ready for those games because we don’t want to let all the hard work slip,” Gunn said.

“There’s only four games left before finals so we’ve put ourselves in a good position to finish top two.”

Gunn said the club was desperate to maintain a top-two spot.

“You finish up there and it makes a Grand Final appearance that much more achievable,” he said.

Pies go top
The match at Putney Heath was moved to Sunday after both clubs foresaw the player shortage a week in advance.

London served up the usual unpredictable summer’s day that included heavy downpours interspersed with wind, clouds and some genuine heat.

Putney’s seven-goal opening term set the tone for the first half with Andrew Slevison, who finished with seven goals, and Greg Chapman, rewarding the work up the field from Andrew Knappman, Andrew Lawson and Bailey.

By halftime the margin was stretched to 21 points. Given everyone’s level of fatigue – umps included – it was hard to say from where the spark could come that would initiate a Wandsworth comeback.

True to form, Wandsworth dug deep and found something. Rhys McNay dominated the term’s ruck contests and gave plenty around the ground, David Hall and Jarryd Browne lifted in the midfield, and forwards Andy Smith and Jeremy Coombe troubled the Magpies’ defence.

All this amounted to a five-goal-to-three term to put the Demons within five points at the last change of ends.

The Demons threw all they had at the Pies in the third term and, with a shoe-string side, it was always going to struggle to find more.

Lachlan O’Toole and Paul “Crazy” Harris were solid in defence all day for Putney.

The last term, save for bursts of passion (on and off the field), fizzed somewhat as players begged for some respite, which came in the form of an after-the-siren goal to the Demons.

But the damage was done – the Magpies were 11-point victors and the deserving recipient of the ‘flag fancy’ tag.

Clapham won the conference game by seven points in a thriller, 8.13 (61) to 8.6 (54). Demon Liam Baker snagged the winning goal from the pocket.

Jared Jones was best on ground with a brilliant midfield display for the Magpies.

Cats win out in feline affair
Swirly conditions greeted West London and North London at Barn Elms, but it was the Wildcats who tamed the conditions the best, winning 10.7 (67) to 6.4 (40).

“It was a real arm wrestle. We only got away in the third quarter where we kicked four goals to their one.

“The next month is crucial for us. We just have to keep winning to give ourselves a chance of a top two spot.”

The Lions’ loss, and the Swans’ win, means the Swans have drawn level with the Lions in the fight for fourth.

Lions president Chris Rea said it was crucial his side had no lapses over the next month.

“We certainly haven’t got it (fourth) in the bag,” he said.

“We’ve had a rough run with people being away but we’ve got more people coming back than people leaving.

“We’ve just got to knock off one of the big sides if we want to creep above fourth. When we play Swans or Hawks those are must wins or else things get shaky.”

In the conference division, Shepherds Bush Raiders dropped their first match of the season, the Lions winning 6.12 (48) to 4.7 (31).

Despite the win, Swans coach Chris Angus wasn’t getting too carried away.

“It will be tough (making the finals) but you never say never,” he said.

“I imagine we would need to win three of the last four games to get in but we’ll be giving it our best shot.”