Ricky Ponting will retire from Test cricket after the third Test against South Africa in Perth. 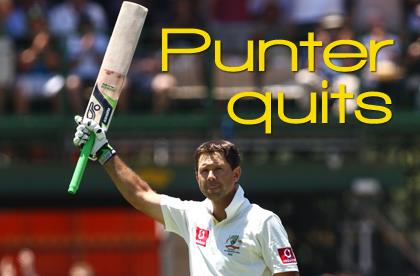 EVEN at the age of 12, Ricky Ponting had sponsors.

Five years later he made his Sheffield Shield debut with an endorsement from cricket academy boss Rod Marsh as the best teenage batsman he had ever seen.

Another 20 years on, Ponting leaves international cricket as Australia’s greatest, and the world’s second highest, scorer of Test runs.

He’s arguably his country’s second most celebrated batsman in the 135 years of the sport.

In a sport which yields so many statistics, Ponting has an undeniable standing in the game.

A total of 13,366 Test runs, behind only Sachin Tendulkar.

An average which peaked at 59.99 in December, 2006 and sits at 52.21 after 167 Tests, with one to go, putting him third on Australia’s list behind Don Bradman and Greg Chappell.

Forty-one centuries, 62 half-centuries and six double tons in a 17-year Test career in which he will equal Steve Waugh as Australia’s most capped player in history.

But one thing statistics can’t quantify is his place in the hearts of Australians.

He’s ranked by many as Australia’s greatest batsman after Bradman, but his brilliant batting was tainted by a flawed captaincy reign and a reputation for petulance on and off the field.

The Argus Report into Australian cricket even said, as a captain, Ponting lacked the ability to solve problems on the field and led a poor culture.

He could bat, though.

His eye was as sharp as his reflexes and his strength belied his size.

The image of Ponting pivoting on his back foot, pulling any number of fast bowlers to the boundary was perhaps matched only by his cover drives.

His first tour with the Australian Test team was one of the great educations and adventures for a green 20-year-old with a big future.

Small in stature, he was already tough and feisty when he went to the watershed 1995 series in the West Indies where Australia won the Sir Frank Worrell Trophy for the first time in 19 years.

While he didn’t play a Test, he immersed himself in the hardnosed culture of the Australian team which emerged from that relentless and hard-won Caribbean series as world beaters after years as also rans.

He was unlucky not to make a century on his Test debut the following season, dubiously given out lbw for 96 in the first Test against Sri Lanka in Perth.

He took five years to cement his place in the Test team, left out of the side as often as he was kicked out of nightclubs as off-field and on-field misbehaviour were too much a part of his early international career.

An accomplished footballer and golfer, the lad from a working class part of working class Launceston was threatening to waste a prodigious cricketing talent.

As Australia chased 330 in Port Elizabeth to win the series, Ponting hit an unbeaten 100, winning the Test with a six.

While Tendulkar betters him overall, Ponting’s batting was peerless from 2002 to 2008. He hit 28 of his Test centuries in that period at an average of 65.34.

During those years, he was probably the world’s premier one-day batsman as well, leading from the front with 140 not out in the 2003 World Cup final against India.

“I said then it was the best day in my cricket life and it still is,” he said the day after his one-day international career was terminated by the selectors nine years later.

In 2003, he became only the second cricketer to score three Test double centuries in a calendar year, including his majestic top score of 257 against India at the MCG.

He hit five centuries in four Tests at home and away against South Africa in 2005-06, including tons in each innings of his 100th Test in Sydney.

And while he was in a team of superstars, it wasn’t all front running.

He scored 32 centuries at No.3, making 18 tons after coming to the crease with the team in trouble at one wicket down for less than 30.

Perhaps his best innings came with the team in just that predicament.

Needing 423 to win the third Ashes Test at Manchester in 2005 or to bat eight hours to force a draw, Ponting came in with Australia in trouble at 1-25.

He withstood a rampant England attack for seven hours, scoring 156 to help Australia to 9-371 and a thrilling draw which kept the series alive at 1-1.

But within weeks he was the first Australian captain to lose the Ashes in 18 years when England took an unassailable 2-1 advantage.

It was a series in which the sides were so evenly balanced, the difference came down to captaincy and England’s Michael Vaughan was the superior leader.

Ponting’s outburst at England coach Duncan Fletcher as he stormed off the field at Trent Bridge after being senselessly run out at a crucial stage by substitute fielder Gary Pratt showed the strain was affecting him.

If that 2005 loss hurt him personally, he showed it.

He dominated the return bout in Australia in 2006-07, opening the series with 196 and 60 not out in the first Test and following it with 142 in the second as he led Australia to only the second 5-0 Ashes whitewash in history.

He finished the series with 576 runs at an average of 82.29 and the satisfaction of regaining the Ashes in the most emphatic fashion.

But by the end of the 2010-11 summer he had led three Ashes losing series and his role as skipper was being seriously questioned.

While the cliche says Australia’s cricket captain has a more important job than the prime minister, it’s certainly a role that faces just as much scrutiny.

Statistically, he is cricket’s most successful Test captain, but Ponting’s tenure was more scrutinised than any skipper since Kim Hughes.

Australia won 48 of the 77 Tests Ponting led, more than any other captain in world cricket, including a record equalling 16 in a row.

Regardless of the figures, he still had to regularly fend off calls for his head from former players, commentators and fans.

He was criticised for poor captaincy, poor form, a short temper, arrogance and even bad sportsmanship after the acrimonious home series against India in 2007/08.

“He is quite inspirational as a leader and I just never get all the detractors he has,” Langer once said.

Ponting finally stepped down from the captaincy after the failed 2011 World Cup campaign, seven years after he inherited one of the greatest teams cricket had seen.

While he only lost 16 Tests as skipper, those defeats included three Ashes series, Australia’s first home series loss in 16 years and a slide in the world rankings from an indomitable No.1 to No.5.

Even before he was captain, his behaviour brought him under great public examination.

In 1998, he was thrown out of a Calcutta nightclub, admitting “I couldn’t remember half of what went on during the night because I’d had a skinful, but I definitely did not assault women in the nightclub.”

On that same tour, he was fined and reprimanded for a clash with Indian spinner Harbhajan Singh, sparking their decade-long feud.

The following year, he fronted a press conference with a black eye and admitted to an alcohol problem after being involved in a fight at a Kings Cross nightclub. He was suspended for three matches and hit with a $5000 suspended fine.

Worse than that, though, he believed he had destroyed his chances of ever captaining Australia.

But, as he proved that night in the Cross, he’s a fighter.

And he fought until the end of his career.

He acknowledged his game had slipped badly in 2011, refused to submit, stripped back his batting technique and started all over again.

He was rewarded with four half-centuries late in the year, but vindication came in early 2012. He showed as much emotion as he ever had when he scored a reputation-saving century against India at the SCG in January, quickly followed by a vintage 221 in the next Test in Adelaide which showed Ponting and the world he could do it again.

The renaissance, however, didn’t continue in one-day cricket.

Four weeks after his double century in Adelaide, he was dropped terminally from the national ODI side after 18 runs in five matches.

And his Test revival was shortlived. In the five Tests after his Adelaide triumph, he averaged 18.44 against West Indies and South Africa and he knew his time was up.

But that 12-year-old identified by Kookaburra as a kid worth sponsoring grew into a man determined to call his own time.

“This is a decision not made by the selectors, it was made by me,” he said.

And so he drew the curtain on one of the great careers in world cricket. – AAP

IMAGE: Australias’ Ricky Ponting celebrates reaching a double century against India at Adelaide Oval earlier this year. The Test against South Africa at the WACA in Perth commencing this week will be Ponting’s last after announcing his retirement today. (AAP Image/Ben Macmahon)