Retirement rumours may not have been laid to rest - but Ricky Ponting at least kept them at bay with a fighting half century at the Gabba. 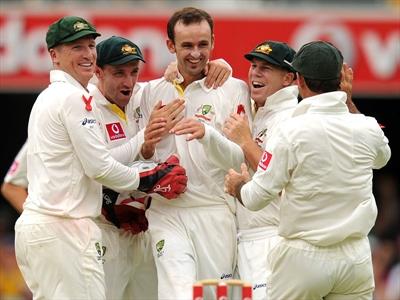 RETIREMENT rumours may not have been laid to rest – but Ricky Ponting at least kept them at bay with a fighting half century at the Gabba.

Ponting (67 not out) shone on the second day of the first Test to lead Australia to 3-154 in reply to New Zealand’s 295 before play controversially ended early due to bad light – under the Gabba lights.

The besieged ex-skipper’s trademark pulls and hooks were again on display in his 57th Test half century but Ponting was cherishing the return of something else on Friday – luck.

He survived a confident LBW shout and was almost run out at the non-striker’s end when sent back by Usman Khawaja (38) – all before he had scored.

The 36-year-old also had a shout from part-timer Dean Brownlie knocked back when referred to the third umpire on 63.

But his successor Michael Clarke was the one counting his lucky stars after chopping Doug Bracewell onto his stumps on 23 with Australia at 3-140 – only for the third umpire to call a no-ball.

Ponting arrived at the crease amid calls for him to retire – but back-to-back half centuries have earned a reprieve for now for the 157-Test veteran.

And off-spinner Nathan Lyon – who claimed 4-69 in New Zealand’s first dig – hoped there was more to come as Ponting chased his first Test ton in 23 months on Saturday.

“Ricky is one of the legends of the game. We’ve all got confidence in him and we’re going to back him right until the end of the day,” he said.

“He’s awesome so hopefully he can go on and make a big one tomorrow.”

Ponting passed 12,500 Test runs in his unbroken 63-run stand with Clarke (28 not out) after a disastrous start to the final session.

On the first ball after tea, Ponting attempted a quick single – only for Khawaja to be caught short by a direct hit from a diving Kane Williamson.

It ended a 66-run stand that had steadied Australia after they teetered at 2-25.

The Khawaja run-out was a rare gaffe in Ponting’s 123-ball innings which featured 11 fours.

A shocked Australia went to lunch at 1-3 after Test debutant David Warner fell for three.

On the first ball of the innings’ second over, Warner tried to duck away from a brute of a Tim Southee (1-31) delivery but it brushed his gloves on the way to keeper Reece Young.

Opener Phil Hughes was then caught in the gully off Chris Martin (1-38) – ensuring the critics will switch their gaze from Ponting to the unorthodox opener.