Phillip Hughes is receiving unconditional support from team-mates but time may have already run out for him to perform the basic opener's role of seeing off the new ball. 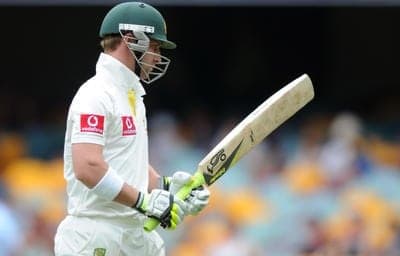 PHILLIP HUGHES is receiving unconditional support from team-mates but time may have already run out for him to perform the basic opener’s role of seeing off the new ball.

Hughes’ Test future is clouded following the promotion of allrounder Dan Christian and his own twin failures against New Zealand at the Gabba, continuing a horror run of early dismissals in the slips cordon.

The 23-year-old on Monday survived the first cut by being included in the 12-man squad for the second Test but still faces an anxious wait to see if he plays in Hobart.

The inclusion of the uncapped Christian suggests the new five-man selection panel is considering bolstering its young bowling attack with a fourth seamer at the traditionally benign Bellerive Oval.

“The balance of a team is always enhanced by the presence of an energetic all-rounder who is in good form,” said chief selector John Inverarity.

While they have won their past two Tests against South Africa and the Black Caps, Australia have sorely missed the all-round game of Shane Watson, who won’t be fit to return until the Boxing Day Test against India.

Watson’s hamstring injury meant part-timer Mike Hussey was used as Australia’s back-up seamer in the past two Tests but he admitted his 36-year-old body would struggle with a high work-rate in Hobart.

Former Test batsman Mark Waugh is one who believes Christian should play as an all-rounder and bat at No.6, forcing the rest of the batsmen up a place in the order.

That would have Usman Khawaja opening and either Hughes or David Warner dropped.

Hughes is likely most in the crosshairs after failing to shake his unhappy knack of being caught between the wicketkeeper and gully, his downfall in his past six innings.

Just as damning is the fact the left-hander is struggling to even play himself in against the new ball.

In his past eight innings, the unorthodox left-hander has only twice lasted longer than 22 balls and made more than 11 runs.

On those occasions he took the shine off the new ball it resulted in career-boosting scores of 88 against South Africa in Johannesburg and 126 against Sri Lanka in Colombo.

Both skipper Michael Clarke and veteran batsman Mike Hussey have stressed those two knocks are evidence Hughes deserves to remain in the top order.

“I reckon there’s a big score for him literally just around the corner,” Hussey said.

“He’s continually done that throughout his career when he’s under pressure.”

Hussey didn’t believe Hughes should be crucified for getting out in the same manner and urged the opener to back his natural off-side game.

“I just think it’s important for him to keep a real clear mind and to keep playing his way,” he said.

“I certainly wouldn’t be saying to him `stop playing the cut shot’ because he’s got so many runs from it and will continue getting a lot of runs from it.”

Aiding Christian’s cause, Watson was the bowling hero in Australia’s last Test in Hobart against Pakistan two years ago, helping them to a convincing win through his reverse swing.

Reverse is also a strong tool of Christian’s trade through regular bowling at Adelaide Oval.