The Opals have given themselves a shot at a fifth successive Olympic Games medal, booking their tickets to London next year by beating New Zealand in their qualifying series. 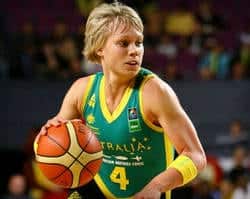 AUSTRALIA’S 92-73 victory in Brisbane on Friday night put them 2-0 up in the best-of-three Oceania championship series and ensured direct qualification for London.

The Opals, silver medallists at the past three Olympics, had won game one in Melbourne on Wednesday night.

Bench tall Elyse Penaluna starred along with giant centre Suzy Batkovic, as the Tall Ferns struggled to cope with their size and power in the paint.

Batkovic top-scored with 19 points and pulled down nine rebounds after a similar starring role in game one, while Penaluna poured in 11 of her 17 points in a third quarter burst which swung the match the Opals’ way.

Australia ambushed the Tall Ferns with their size advantage in the first quarter, taking a 14-point lead to the first break as Batkovic and Abby Bishop dominated early at the Brisbane Entertainment Centre.

Despite New Zealand pulling them back in the second quarter, it always looked a retractable lead the Opals were capable of stretching once they found another gear.

That they did late in the third quarter.

Australia pushed their lead out to 14 again by the final break as Penaluna lit up, hammering home once more the Opals’ size advantage and depth.

New Zealand will get a second chance to qualify for the Olympics through a testing worldwide repechage tournament to be played next year.

Game three in the Oceania series will be played in Sydney on Sunday.