NSW have finally broken their State of Origin drought, claiming their first series since 2005 with a 6-4 game two victory over Queensland in Sydney. 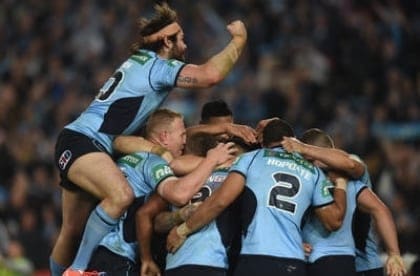 NSW clinched their first State of Origin series win since 2005 by downing Queensland 6-4 in game two at ANZ Stadium on Wednesday night.

Queensland looked like they would again defy the odds when they led 4-0 at halftime thanks to two penalty kicks by Johnathan Thurston, ensuring he eclipsed fellow Maroon Mal Meninga’s Origin point-scoring record of 161.

But spurred on by a largely pro-Blues 83,421-strong crowd, NSW finally hung on to break the Maroons’ once vice-like grip on the Origin trophy.