North London made arguably the most powerful statement in AFL London’s first weekend of finals, beating West London by 40 points in Sunday’s elimination final at Bounds Green and sending the reigning champs out of the Premiership race. 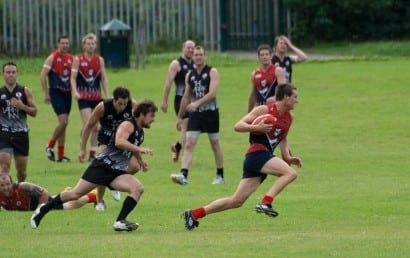 By Lee Crossley
NORTH London made arguably the most powerful statement in AFL London’s first weekend of finals, beating West London by 40 points in Sunday’s elimination final at Bounds Green and sending the reigning champs out of the Premiership race.

While most clubs are despairing at dwindling lists due to players jetting off to enhance their tan, North London — and Wandsworth for that matter — seem to be having headaches of a good kind at the selection table with healthy lists from which to choose.

Quentin Keeble booted five goals, while lace-out delivery came thick and fast from Luke Stevenson, Luke Hamilton and Benny Poole in the midfield. In defence, Dean Ipaviz brought his own ball, while Brendan ‘Irish’ McGeever at fullback beat multiple opponents throughout the day.

West London’s best chance of taking it to North came in the third term when North had one less player due to a send-off. West London tried in earnest to penetrate the lines, but North held them at bay and scored just one fewer point for the term — enough for them to steam home in the last.

Meanwhile on Saturday, Wandsworth were sublime in their Premiership semi-final against an under-strength Putney, winning 13.10 (88) to 5.13 (43) to advance to the Grand Final at Motspur Park on 18 August. There they’ll meet the winner of North London and Putney, Saturday’s preliminary finalists.

To single out any superior Demons’ players from Saturday’s victory would detract from the evenness of their team win and the consistency of every rest-of-world player in red and blue.

Many present thought Putney boasted the superior midfield with Clayton Fitzgerald, Andrew Lawson and Aaron Knapman and those three certainly were among the best half-dozen on the field. However the Demons would have had the overwhelming majority of the best players if the best 20 or 30 were considered, adding weight to the adage that a champion team will always supersede one built around a handful of champions.

‘And we’ll win the flag this year’ is a line in the Wandsworth theme song. This year, perhaps? There’ll be no one in white and blue to stop them this time.

Certainly, the Magpies appeared to lack focus when entering attack — their focal point Andrew Slevison, the league leading goalkicker with 54 from 10 matches, is off travelling until the Grand Final. That left Luke Jackson to take the main forward post but the big South Australian couldn’t replicate the form that saw him bag eight against the Swans the week before as frustration got the better of him. On top of all this, four Magpies were last-minute withdrawals.

Both clubs met again on Sunday, this time in the Conference division, and the same result ensued: the Clapham Demons dominated their elimination final to knock Putney’s seconds out, 15.10 (100) to 5.8 (38).

Clapham was buoyed by a best-on-ground performance from Markham Johnson (back from football’s wilderness minus his toenails), whose hitouts from stoppages were just as effective as a kick in many cases.

Matt Ashton booted four goals as a floating forward in what was again yet another even team performance from a side that boasted many players who would walk into most senior sides (such is the depth of the Demons this finals series).

But let’s not get carried away. Clapham must now account for Regent’s Park Lions in the preliminary final before they can even think about Conference flag favourite Shepherd’s Bush, which beat the Lions, 12.18 (90) to 10.4 (64), on Saturday.

Craig Marshall has Raiders charges playing for the jumper and hungry for back-to-back flags. Trav Chiuchiarelli (the hardest name to spell in footy) has strung together a couple of impressive games up forward that seems to have given the side a lot of direction up front. The return of Cal Nicholls and Evan Scicluna from Cats’ duties has not harmed their midfield bite either. Expect them to have a big say come 18 August on who holds the Conference trophy.

And there is excitement aplenty in the social division with Reading Roos beating Ealing Emus on Saturday, 8.13 (61) to 4.2 (26), to advance to their first Grand Final since joining the league five years ago.

Which brings us to this weekend’s matches and there are some crackers. With the Olympics winding down, occupy the other half (or better yet bring her/him along) and get to Regent’s Park (five minute walk from Bounds Green tube) on Saturday for the Preliminary Finals.