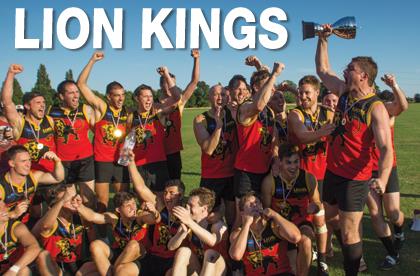 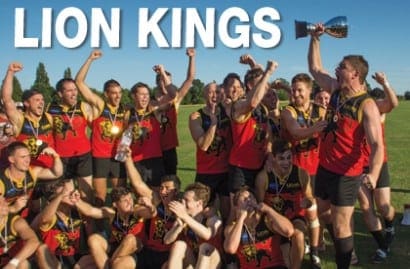 By Lee Crossley
THE AFL London season reached an epic climax at Motspur Park on Saturday with the Lions and Raiders winning the Premiership and Conference flags by a combined margin of just three points.

North London led Wandsworth all day in the Premiership division but it looked like the Demons, aided by the breeze, would run away with it in the last term before the Lions dug deep and held on for a one-point victory – and a 2012 AFL London Grand Final win – 8.8 (56) to 8.7 (55).

The win marks a decade since the Lions’ last flag in 2002 and several members of that side were on hand to witness the thrilling result.

For Wandsworth, it was more heartbreak — the awesome season in which they dropped just one match went up in flames by the slightest of margins, consigning them to runners-up for the second year in a row.

Former Northern Bullant Luke Stevenson won the medal for best on ground with his dominant performance in the Lions’ midfield where he controlled the game’s tempo at crucial stages.

Brendan ‘Irish’ McGeever, Lions’ fullback, won best rest-of-world player, while Wandsworth halfback Simon Stewart won the prize for best from the losing side for his sweeping role across halfback.

In the Conference game, Shepherd’s Bush Raiders led by 32 points at three quarter-time before Regent’s Park came hard at them with the breeze.

Raiders skipper Evan Scicluna was best on ground with several goals from the midfield while Levi Fernandez was adjudged best from the Lions.

Sam Stranks, who plays in Oxford Uni’s AFL team part of the year, took best afield honours for his role in the Roos’ midfield, while onballer Greg Horgan was best for the Hawks.

Premiership: North London 8.8 (56) defeated Wandsworth 8.7 (55)
No one could have written a better script than what unfolded in the Premiership match.

The first half was tense, yes, but played as though both sides were holding something back, waiting for the other to stumble so the advantage could be seized (or perhaps the 31-degree heat was simply taking its toll).

The Lions took a two-point lead into quarter-time after 42-year-old Kiwi Brian Chisholm set them alight with a brilliant running goal in the opening term.

Chisholm’s brilliant four-quarter effort put him in the running for the best ROW on the day, only to be eclipsed by McGeever, who nullified Demons danger forward Mark Brescacin for three quarters.

The second term was scrappy with neither side again able to break free and establish a sizeable lead. The Lions got one goal, while holding Wandsworth to a meagre behind but all knew the third term would provide some fireworks.

As the sun refused to relent, players took their places in what was make or break.

The tension was palpable — on the sidelines and in the middle. Every contest mattered.

Just several minutes into the third term, the Demons were granted the opportunity they had been waiting for. When Lions onballer Luke Stevenson was knocked to the ground late by Demons ROW Eoin Ã“ MurchÃº, umpire Luke Shaw rushed to pay a 50-metre penalty almost immediately. However Lions skipper Courtney Shergold got involved, flooring the Irishman, which resulted in the North London captain being sin-binned for 25 minutes of playing time.

That should have been the moment that allowed the Demons back in, but playing one man down only seemed to stir something within the Lions’ engine room as Stevenson — who failed to make the Demons pay with his shot 30m shot for goal after the 50 — found something extra, along with Luke Hamilton, Benny Poole, Dean Roberts, Jake Spiteri and Quentin Keeble.

Mark Hawkins was again solid in the ruck as he battled against Demons’ hard man Rhys McNay.

The Lions added three goals to zip in Shergold’s absence but everyone knew the Demons would not bow down lightly.

Brescacin pegged one back against the flow to keep the Demons 20 points in arrears heading into the final term with the breeze and an extra player.

The Lions didn’t score a goal in the last term. The Demons through coach Jarryd Browne, who managed to slip Lions’ Morgs Clement’s tight tag for a moment, goaled from outside 50 to get the Dees going. Then Jeremy Coombe followed suit, as did Brescacin to make it three in succession.

To say the Demons had opportunities to win the game would be a gross understatement; however it would also under value the Lions’ courage and gut-wrenching spirit to resist the countless attacks and pressure their defence was put under in the dying stages.

The Demons got within a point with six minutes to go but could not conjure another, even to take it to extra time, as the Lions held on for that entire period.

A talking point that will no doubt feature in post-match musings for some time to come is whether Coombe’s attempt to mark in the dying minutes in the forward pocket should have been rewarded.

Equally, the Lions camp might have debated the Shergold send-off if the result had gone the other way.

What’s done is done and the Lions, with their seventh win in a row, have struck gold and cashed in on their red-hot form to be the 2012 AFL London Premiers — their first flag in a decade.

Coach Adam Littlechild spoke after the match of how the club picked itself up off the floor after big defeats at the hands of West London and Wandsworth at the beginning of the year.

“We looked at Wandsworth and how you guys played and knew we had a long way to go,” he said.

“But we tried to model ourselves on you because we knew you were the benchmark.

Conference: Shepherd’s Bush 11.11 (77) defeated Regent’s Park 12.3 (75)
Someone once said ‘the team that scores the most goals by the end of the game wins’. They obviously were not acquainted with the great game of Aussie Rules too well because, as you can see from the score above, the victors were not the most prolific scorers of goals.

When the teams headed to their quarter-time huddles with the scoreboard showing Raiders leading 4.1 to nothing, it looked as though a one-sided affair might be on the cards.

But what seemed like a benign breeze in the morning was becoming more swirly and increasingly advantageous.

The Lions wasted no time using this and soon clicked into gear, booting five goals to the Raiders’ one in a dominant second quarter to be back on even terms at the main break.

The Raiders headed into the third term knowing they must make use of the breeze but the scoreboard by the end of the term — 9.11(65) to 5.3(33) — suggested they had not made full use of their opportunities, although three goals in the last two minutes certainly helped their cause.

The door was ajar for the Lions but had they left too much work to do?

In an intense final stanza, the Lions struck with four goals to get within eight points. They were up and about and with their Premiership teammates warming up nearby, they threatened to overrun the Raiders who had led all day.

Trent Dunlop’s goal stemmed the bleeding and extended the Raiders’ lead to 14 but, in a goal spree, the Lions got two more, through Rob Reynolds and Gilligan, to get within two.

But the Raiders weren’t done. Not by a long way. Jake McGuane, whose size and strong hands proved a challenge for the Lions’ defence all day, scored at a vital time to stretch the margin back to eight points.

The Lions scored the last goal, through Dave Strugnall, but it would be their last for the season and, while it gave them one more goal than their opposition, the 11 behinds the Raiders scored previously was enough to yield an historic eleventh flag for the side in 12 years. 11 goals and 11 behinds in the match to score a record 11th flag.

AFL London stalwart and Raiders coach Craig Marshall played his last game to become the most successful Raider in the club’s history, having been involved in six premierships as player and coach.

He praised the work behind the scenes by Dan Prigmore, Nathan Costley and president Luke Fenney after the match.

It is the club’s first flag since joining AFL London in 2007 after the dissolution of the regional league.

Coach Travis White could not praise his charges enough after the game.

“This flag has been building for the last three years really,” he said.

“We’ve enjoyed good nights on the training track this year and had a good first final and finished it off today.

“We only run about a third Aussies and the rest are made up by GBs and euros.

“The foundation of the club, the guy who has kept the club running, is Adam Bennett.

“He’s just been a rock for us. He’s the one who’s held the club together.

“Hopefully this will help put our name out there. It’s hard for us to recruit given we’re outside of London so hopefully now we’ll get a bit more recognition and it can be the start of something.”

Did you watch the AFL London Grand Finals? Tell us your thoughts below: