No fairytale finish for the great Ricky Ponting

The fairytale innings was not to be for our best bat since Bradman. 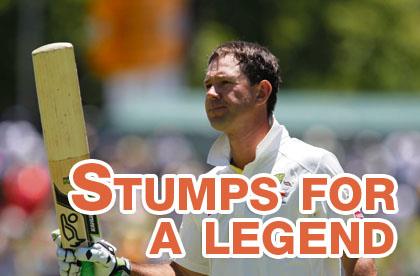 IF Ricky Ponting had any lingering doubts about whether he chose the right time to retire, his two innings in Australia’s defeat in Perth would have put them well and truly to bed.

As much as Ponting wanted a fairytale finish to his glittering Test career, it became clearly evident he had already extracted every ounce of talent from his ageing body.

At 37 years and 350 days of age, Ponting was no longer the force he once was.

After making just four in the first innings of the third Test against South Africa at the WACA Ground, Ponting could only muster eight in his second dig before edging spinner Robin Peterson to Jacques Kallis at first slip.

Peterson, playing his first Test since early 2008, celebrated as if he’d won the World Cup.

Kallis was more subdued, knowing all too well he’d just played a role in finishing one of the greatest careers of all time.

Ponting was given a guard of honour by South Africa’s players when he made his way to the crease with Australia in early trouble at 2-81, chasing 632 for victory.

And the good-will continued from there.

And when Ponting was dismissed, he received congratulatory handshakes from most of South Africa’s squad.

As he walked off the Test arena for the final time, Ponting raised his bat and helmet high in the air to acknowledge the crowd on hand.

Australia were eventually bowled out for 322, giving South Africa an emphatic 309-run win with more than a day to spare, after they belted 569 in their match-winning second dig.

Former Test opener Justin Langer, who retired in 2007, said Ponting would have been disappointed to be dismissed at the hands of a spinner on the fast and bouncy WACA deck.

But Langer said his former skipper could now let his guard down and reflect on a magnificent career that netted him 13,378 Test runs at an average of 51.85.

“I know it’s been quite emotional for him this week but I sense now it would be a great relief for him,” Langer told Channel 9.

“I get the sense that relief will be one of his strongest emotions.”

In the series against South Africa, Ponting scored just 32 runs at an average of 6.4.

It wasn’t the fairytale end he was after, but at least it was a fairytale career for a man widely regarded to be the best batsman since Sir Donald Bradman.

By Justin Chadwick and Ben Horne with AAP

THAT’S OVER: Ricky Ponting acknowledges the crowd after being dismissed for 8 runs in his final Test innings (AAP Image/Theron Kirkman)