Australian swimmers Nick D'Arcy and Kenrick Monk may have landed themselves in hot water yet again, after posting photos online before their Olympic social media ban had ended. 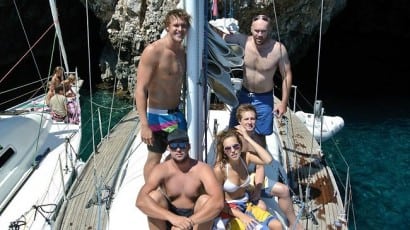 AUSTRALIAN swimmers Nick D’Arcy and Kenrick Monk may have landed themselves in hot water yet again, after posting photos online before their Olympic social media ban had ended.

The pair were due to be sent home at the conclusion of the London Games’ swimming program as punishment for uploading a picture to Facebook of them holding guns in the US, but were later granted permission by the Australian Olympic Committee to meet their family for a holiday in Europe first.

They were also ordered to not use any social media during the Games period.

But Monk appears to have flouted the ban by posting photos of the pair’s trip to Croatia on Facebook and Twitter on Sunday – the last day of competition.

Both are seen cruising with friends on a luxury yacht and swimming in the waters off the island of Hvar.

Monk also uploaded a photo of the men’s 4x200m relay team via Twitter on 31 July.

The photos have sparked a flurry of tweets about the so-called ‘bad boys’, with D’Arcy heavily criticised for taking the holiday after declaring himself bankrupt.

Wallabies star Quade Cooper was among those who weighed in on the debate.

“Can’t believe the morning show are having a go at the swimmers for having a holiday” he tweeted on Wednesday. – AAP

Do you agree with Quade? Or have the pair broken the rules again in your eyes? Tell us below: