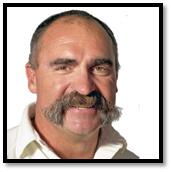 IT has been a decidedly average year for Australian cricket. The sacking of national coach Mickey Arthur, problems with team discipline and failure to win the Ashes has seen the sport facing its lowest point in recent memory. Australian cricket legend Merv Hughes knows how to fix things, however: pick a team and stick with it.

Mr Hughes, a fast-bowler who played in 53 Test matches between 1985 and 1994, spoke to the Australian Business Lunch at Lord’s Cricket Ground today ahead of the fifth and final Test of the Ashes series. He was interviewed by prominent ABC cricket commentator Jim Maxwell, discussing everything from the recent series to the way in which the game as changed since he played.

Mr Hughes said: “When I was playing we were semi-professional sportsmen. We didn’t have the 24/7 pressure that the players have today. We used to play from October to March and that was it. These days’ players have to be ready to go all year, playing pointless one-dayers and T20 matches. I don’t think I would have enjoyed myself as much if I was playing in this era.”

Mr Hughes told the Australian Business Lunch that very few players were assured of their position in the Australian squad and that he believed only Michael Clarke, Ryan Harris and Brad Haddin were guaranteed choices for selectors. Mr Hughes himself served as a selector for Cricket Australia between 2005 and 2010.

Mr Hughes said: “Australia now have the leadership, but not the talent. Anyone in the room who manages a business knows that you don’t get results by chopping and changing, yet that is what the Australian team have been doing. We need to pick a team and stick with it.”

The iconic Australian cricket identity praised the appointment of Darren Lehmann as Australian coach, claiming that the former player is well known and well liked within the team. Mr Hughes said that former coach Mickey Arthur had faced cultural issues when taking over the Australian cricket team that he had not managed to overcome during his tenure in charge of the national squad.

Mr Hughes said: “The problem isn’t that Mickey Arthur was sacked right before the Ashes, the problem came eight months before when he was hired in the first place. Mickey Arthur was at WA before taking the Australia job and WA cricket actually went backwards.

“From what I know – and I wasn’t on the inside – he wasn’t well liked and respected as a person and as a coach by the players and when you have that at the elite level of sport you have serious problems. Now that Darren Lehmann is there they have someone that they know and they respect what he’s done and you can already see the impact.”

Mr Hughes also discussed his playing career, keeping the audience entertained with stories of previous Ashes tours alongside other iconic Australian cricketers such as Alan Border and David Boon. He discussed the practice of sledging — which he refers to as “bluff and bullsh*t” — and its importance as an aspect of the psychological warfare involved in cricket.

Mr Hughes said: “As a bowler I don’t want a batsman comfortable at the crease so I’m going to do everything I can to make sure that doesn’t happen. In England they refer to it as chirping. In the Australian team we refer to it as tactical intimidation.”

Known as one of Australia’s most well-loved larrikins, Mr Hughes lived up to his reputation with a number of friendly jabs at Australian rivals England and South Africa. He joked that all eleven players — “and the twelfth man, if he is on the field of some reason” — would sledge South African captain Graham Smith purely because “no one likes him”, and took a swipe at England for using South African players on their national team.

The fifth Test of the Ashes commences on 21 August at the Oval in London. Australia will have a chance to reclaim the Ashes in Australia over the 2013/14 season, commencing on 21 November at the Gabba in Brisbane.