Visiting team the Melbourne Storm emerged victorious at the World Club Challenge at Headingly in Leeds, taking out the cup in a nail-biting 18-14 finish against the former Super League Champions, the Leeds Rhinos. 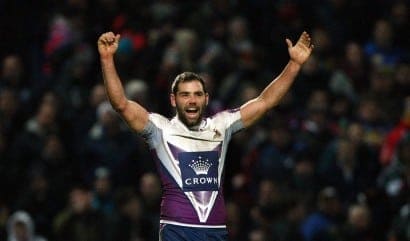 FIRST up, a confession. I am a very proud and staunch St. George Illawarra supporter.

I have been bleeding red and white since I was old enough to breath. One of my earliest childhood memories is sitting with my Dad on the hill at Kogarah Oval. I think Jamie Soward is a God. My favourite song is ‘When the Saints go marching in’ and I cried tears of joy in 2010 when St. George took out the Premiership. So, like any loyal fan, it is also with great amounts of passion that I hate, and I mean HATE, the Melbourne Storm.

Let’s be honest, 1999 still hurts. The scars from the sight of Glenn Lazarus doing cartwheels at full time are still yet to heal. Let’s not even mention the 70-10 score line in 2000.

However, in saying this, bloody hell – I still love watching them play.

As far as rugby league entertainers go, it doesn’t come much better than the sheer natural talent of the boys of the Melbourne Storm. Therefore the opportunity to watch the likes of Cronk, Slater and Smith go head to head with their UK equivalents in the Leeds Rhinos — including 2012 Golden Boot winner Kevin Sinfield and teammates Ryan Hall and Rob Burrow — was too much for any rugby league fan to turn down.

On invitation from the Rugby Football League (RFL) — England’s governing League body — I went to Headingley in Leeds on Friday and took my seat for what turned out to be a cracking game between two very competitive teams with a history of strong international rivalry.

It ended with a nail-biting 18-14 score line, the Melbourne Storm only just running out with the 2013 World Club Challenge title and winning back another trophy previously stripped from them in 2010 along with their 2007 and 2009 NRL Premierships due to a salary cap scandal. It was no easy win, with the host club — and 2012 UK Super League champions — the Leeds Rhinos, answering back confidently to everything the well-drilled Storm threw in their direction.

The Storm struck first in the 20th minute through the slick brilliance of Clive Churchill Medal winner Cooper Cronk putting Ryan Hoffman into a gap, allowing Billy Slater the chance to post the first try of the match. Skipper Cameron Smith added the extras to give the Storm a 6-0 advantage. This soon became 8-0 after Smith landed an easy penalty goal from right in front.

Despite Leeds’ ability to chase the win all game, and keep Melbourne in check, it was clear from early on Storm had control of the match and the mental edge over a seemingly frustrated Leeds team. Although Leeds had more attacking flair, driven by the ruck running brilliance of Rob Burrow, they failed to complete their sets, demonstrating poor 5th tackle options and drop balls at crucial moments of the match.

Leeds fought back in the 29th minute via a last tackle tirade which saw winger Ryan Hall cross over in the corner. Sinfield added the extras, and another late penalty saw the match tied up at 8-8 into the half.

The visitors took control early in the second half, running in two quick tries. Storm Prop Jesse Bromwich beat four defenders to crash over the line in the 44th minute, followed by Cam Smith again adding the extras to take the Storm to a 14-8 lead. Almost as quickly as play was resumed a brilliantly played 50-metre sweep saw Tohu Harris in the clear and running for the line. Some further passing between Waqa and Chambers saw the rookie dive over for the try that inevitably sealed the game for Melbourne and gave them an 18-8 advantage.

However, Leeds responded with some magic of their own as Captain Kevin Sinfield kicked cross field, with second rower Jamie Jones-Buchanan scoring and some creative lobbing, batting and miracle passes from Hall and Moon taking the game to its final score of 18-14, with Sinfield adding the extras.

All in all it was a great game by two champion teams. Not only did the game provide the spectacle that fans across both Australia and the UK would come to expect from the two current rugby league premiers; the atmosphere of the crowd added to the event, with the stadium applauding their defeated heroes with pride and congratulating the victors with class and grace.

RFL hosted a spectacular match, and it was a great example of their skills as the professional body responsible for the smooth running of these matches, keeping rugby league alive in the UK and playing host to many visiting talents.

In addition to the World Club Challenge and the Super League competition, this year will see RFL play host to 14 nations, including Australia, for the Rugby League World Cup in October 2013. Matches will be played across the UK, with the final at Old Trafford on 30 November.

With their passion and knowledge of the game equal to any in Australia, the RFL’s hosting of the Super League and upcoming World Cup is guaranteed to rival that on offer back home. For those Australians having to resort to dodgy internet streams or early morning Walkabout visits for their League fix, I encourage you to consider a Super League match for the unrivalled live game feel. The only way the World Club Challenge would have been better is if it was 2011 and I could have seen St. George win.

For more information about Australia’s matches in the Rugby League World Club and to purchase tickets go to rlwc2013.com.