Melbourne Rebels halfback Nick Phipps is again back in the running for a Wallabies berth after starring in his side's upset win over Super Rugby heavyweights the Crusaders. 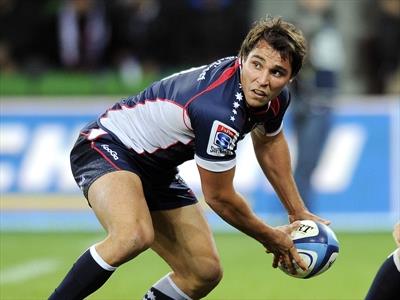 MELBOURNE REBELS halfback Nick Phipps is again back in the running for a Wallabies berth after starring in his side’s upset win over Super Rugby heavyweights the Crusaders.

Phipps scored two of his team’s three tries in the 28-19 win at AAMI Park to chalk up his second successive star showing.

After an indifferent start to the season when he found himself coming off the bench, the 23-year-old looks a different player since Kurtley Beale moved to five-eighth; their blossoming combination a constant threat to the opposition.

Rebels coach Damien Hill said Phipps, who played one match for the Wallabies at last year’s Rugby World Cup, had lost confidence in himself.

“He went through a bit of a patch where he was starting to doubt himself,” Hill said.

“Based on a lot of encouragement from those around him and some good training effort, he really backed himself against the Bulls and did it again (against the Crusaders), the performances are coming.

“I thought last week was probably on par with some of his best performances from last year and this performance exceeded them.”

Hill said he couldn’t think of any stand-out faults in Phipps’ game and believed Wallabies coach Robbie Deans, who was watching in the stands, would have been pleased.

Phipps was set to be the Wallabies No.2 this year behind Queensland’s Will Genia but looked to have been eclipsed by Brumbies in-form No.9 Nic White.

The Rebels next face the Force in Perth before a tough away trip to take on the Highlanders in New Zealand as they look for their fourth win of the season, after matching last year’s tally of three.

Hill said they needed to continue to deliver, particularly in defence which was a highlight of the victory over the Crusaders with credit going to their defence coach John Muggleton.

“We only missed six or seven tackles for the entire game which is tremendous,” Hill said.

“We spent a lot of time on defence this week and John has persisted with the small things and the systems and they clicked and I’m really happy with the team and for him.”

Hill said such a solid win over the seven-time champions was very satisfying.

“You can’t under-estimate what it means to these guys to play that well against a team of that calibre and to come away with a win,” he said. – AAP