Putney and Wandsworth all but booked AFL London semi-final berths with wins at the weekend as the London Swans saw their top-four hopes fade. 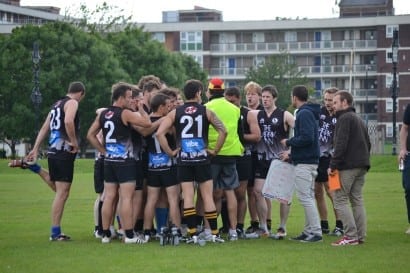 By Lee Crossley
PUTNEY and Wandsworth all but booked AFL London semi-final berths with wins at the weekend as the London Swans saw their top-four hopes fade.

Mathematically, London Swans could still make the four but would need to beat an in-form North London on their (lop-sided) turf as well as topple Putney — an unlikely scenario.

At this stage, it looks like a Wandsworth-Putney semi-final on 4 August, while the Wildcats and North London look set to meet in the sudden-death preliminary final on 11 August.

The smart money seems to suggest Putney is on track for their first-ever AFL London crown, however top side Wandsworth, with just one loss, might have something to say about that.

This scribe saw Putney first-hand on Saturday take care of business — for the second time this year — against West London, the reigning champs.

It was a match that had it all: heavy rain, wind, brief sunshine and a hovering helicopter for the entire second term with little separating the two sides right to the end.

The Magpies led by two points at the main break, before the Cats stole the lead back to edge ahead by two at the last change.

In controversial circumstances, Magpie Luke Jackson marked 30m out in front in the final term. His kick on goal went precariously close to the right-hand goal post with the goal umpire adjudicating a goal. The kick in question came midway through the quarter and, although much action ensued before the final siren, it left many (particularly those from the home bench) to ponder ‘what if?’.

Irish giant Jimmy O’Connor dragged himself out of bed and shrugged off the flu to ruck solidly all day for the Magpies and give midfielders Lawson, Aaron Knapman, Greg Chapman and Clayton FitzGerald first use. Josh Oakley, returning to the side, was super reliable in defence.

“The club was formed in 2004 and has played in two Grand Finals but never won it,” Putney’s Mark Pitura said.

“We’re rapt with how the boys are travelling this season but there is plenty of hard work ahead.

“Saturday’s win really shows the depth we have this season with six premiership regulars unable to take the field.”

Defenders Dan Prigmore and Alex Adams were the shining lights for West London.

In the Conference division, top three teams Shepherds Bush, Regents Park and Clapham all took the chocolates to consolidate top-four standings. Fourth spot is still up for grabs with Hammersmith and London both locked on 12 points.

Who do you think will win this year’s AFL London flag? Tell us below: