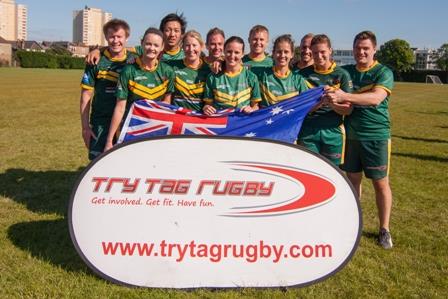 London Australia was represented in all three divisions (mixed A, men’s and mixed social) at the Try Tag Rugby International Cup tournament held on Saturday 8 June, and managed to secure some silverware in the mixed A grade division.

The London Australia mixed A grade team finished third at the last International Cup tournament held in November 2012, behind the Great Britain and Ireland world cup squad and London New Zealand, and were determined to bounce back at this International Cup.

London Australia went through the pool stages undefeated with the following results; 4-2 against London Ireland, 4-4 against London New Zealand and 8-3 against Try Tag Rugby England.

This set up the Aussies against the home town team, Try Tag Rugby England, for the semi finals. After putting up a great fight in the showdown, England went down narrowly 8-6.

London Australia progressed to the final to take on the might of London Ireland whose only loss of the tournament had been against the Aussies in the pool stages. The Aussies were first to put points on the board courtesy of an Adam Madigan kick chase and regather and never lost the lead, putting in their best performance of the tournament to secure a 6-1 victory to claim the title.

London Australia also did extremely well in the men’s division, narrowly going down 2-1 in the final to trans-Tasman rivals, London New Zealand. In the mixed social division, the Aussies finished in eighth position.

Meanwhile, Try Tag Rugby’s summer leagues commence from 25 June onwards at 15 venues across London and Reading. Due to the successful Fulham league which sold out in its first season, Try Tag Rugby are introducing a 2nd evening (Tuesdays) at Fulham.