Living the London dream but I miss my footy

Being a rugby league fanatic living in London, something is missing. That’s easy access to our game…or so you may think. 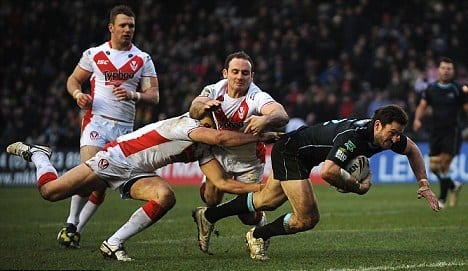 There are three things in this world that I don’t like much. Magpies, U2 and the rugby league off-season.

Controversial I know, but before you jump down my throat, hear me out, let’s examine this statement.

First off, I think we can agree that all three of these things are annoying!

One is a murderous bird that takes pleasure in launching aerial attacks on us (I didn’t say Collingwood, did I). The second is a whiny band far beyond my abilities of comprehension to understand why people actually like them. The third subjects us to 5 months of Cricket.

Now, I’m not one to dwell on the negatives in life such as swooping birds or Bono, and granted the cricket (Mitch) has actually been alright this year. Rather, I choose to rejoice in the good: the sun is showing glimpses of itself in Britain, summer is coming, rugby league is back and my mighty Dragons sit proudly on top of the NRL table. The world makes sense again.

To quickly digress though, I think we can all agree that living in London is a truly amazing experience. I’m not telling you anything new here. We all know this.

We live it, we love it. We bask in it, we take it all in. We proudly show off photos on Facebook coupled with shorthanded boasting status updates. We cast pity on our poor mates back home who won’t know, understand or appreciate the experiences that London gives us on a daily basis.

However, as a rugby league fanatic, something is missing – easy access to our game…or so you may think.

Back in Australia, one of my all time favourite things to do was don my Red V, sit on the hill, have a beer and cheer on the Saints. Here however, my Red V is a smelly pyjama top. The Hill, is my bed, the beer is a cup of tea and the cheers have to be at a minimum so I don’t wake up my flatmate.

We’ve all done it. The sickie so we can watch State of Origin at 11am on a Wednesday. The 4am rise to see your team play. Watching the game half asleep via some dodgy live stream that Jim from Dubbo is feeding to us, that oddly seems to drop out whenever a try is scored. Or at worst, getting all your league updates from NRL Highlights on YouTube or spoilers from your mates back home. Living the London dream? Yes, but, I miss my footy.

Indeed, living in London or even South England in general is hard for a rugby league fan. Rugby league is a Northern sport and pretty much ignored south of Manchester. But never fear London, because our great game is closer than you think. And it comes to us courtesy of the London Broncos.

Now, I know what you’re probably thinking. Broncos? Super League? No thanks! But hear me out. It’s worth a look. Even I have adopted the Broncos as my team, and believe me, as a Dragons man, cheering on a team called “The Broncos” that look like the Cronulla Sharks hasn’t exactly been easy. But if I can do it, anyone can do it.

In the UK, a lot of traditional NRL fans share the same mentality. The Super League is the NRL’s retirement home. The place where the once greats come to die. Has-beens come to earn a quick quid and mediocre players can make a name for themselves. Pretty much, for lack of a better explanation, the Super League is the pre Russel Crowe era, South Sydney Rabbitohs. But you couldn’t be more wrong.

For those that missed last year’s season, that’s a shame, you missed a great year. Rugby league’s relationship with the UK was at its peak in 2013, and as a supporter, it was exciting to be a part of it. Let’s recap.

2013 kicked off in February with the traditional World Club Challenge, played between Leeds and Melbourne. The Storm ran out 18-14 winners in what was a classic battle. Throughout the year we had the excitement of the Challenge Cup, which saw Wigan beat Bradford in the final. In June, NRL legend Jamie Soward came over and played out the 2013 season with The London Broncos. This brought much media attention to the struggling Broncos as he helped the London based club make it all the way to the Challenge Cup semi-finals where they sadly lost to eventual premiers Wigan. Despite falling at the second last hurdle, this was a great  achievement for the club.

The year ended with the UK hosting the 2013 Rugby League World Cup. Teams from Australia, New Zealand, England, Ireland, Wales, Scotland, Fiji and even Italy all run around the UK for what was an amazing experience, and gave us fans something to cheer about.

The games were fast, the talent on display was incredible and the whole competition was played in great spirits. Australia ran out convincing winners against a young Kiwi outfit, but this by no means under played England’s strong showing and involvement in the competition. Sadly missing a grand final spot by the hands of a last minute New Zealand try, England played their hearts out in what I consider to be the greatest and most gripping game of footy I have ever seen in my life. Despite the loss, their amazing run won over many new fans and assured them that their young team will be back and very competitive come 2017. In fact, they are my tip to win it!

After a stellar 2013, 2014 is sadly a bit baron on the international rugby league front. But what 2013 managed to do, and do well, was market the UK game and make people aware of the great product the RFL have going here. And with the Super League season and Challenge Cup just starting out, there are many, many weeks of great footy yet to be had this year.

The days of the Super League retirement castle are well and truly gone. The game’s next superstars are running around in backyard stadiums right under your noses. If you are missing your footy and haven’t gone to see a Super League match yet or watch The Broncos represent this great city we’ve come to call home, then hope on the Jubilee Line, get yourself out to the Hive and cheer our boys on. They need us; let’s keep them alive.

With their next home match against Castleford scheduled for Thursday the 27th March, head out and back the Broncos, Tell ‘em George sent ya. You won’t regret it.

IMAGE: Chris Bailey scores for the London Broncos in the Super League (rugby league in the UK)