AFL London Round 9: Recent years have seen some epic clashes between these two clubs, and this was to prove no exception.

The previously undefeated West London Wildcats travelled to North London on a warm summer’s afternoon to take on the Lions in an AFL London game that was fast and furious from the very start.

The Lions began with the aid of a strong breeze in the first quarter. However, the intensity shown by both sides early on made it clear that advantages would be hard to come by. While the Lions managed four goals for the quarter, the Wildcats worked hard to score three against the breeze.

In the second quarter the Wildcats found more ball. With the breeze at their backs they held sway for most of the quarter. However, scoring opportunities proved few and far between. The physical approach from both sides continued. In general play it was the opposing back lines that were on top. For the Wildcats, Jared Risol led the way at half back. For the Lions it was John Green doing the same. As the siren sounded for half time, a two-goal quarter to the Wildcats was a one-goaler for the Lions and the scores were even.

Both sides sought some shade to recover during the long break. However, no one expected what was to come in the important third quarter. The Lions again had a strong wind blowing to their end. After only a few minutes of even play, the goals started to flow. American import Louis Manning kicked three goals for the quarter, while his partner up forward, Elliot Duke, managed two. With the ball in the Lions forward line for most of the quarter, the Wildcats were under siege. The result was an eight-goal-to-one quarter in favour of the Lions, and a 40 point lead as the third quarter ended. 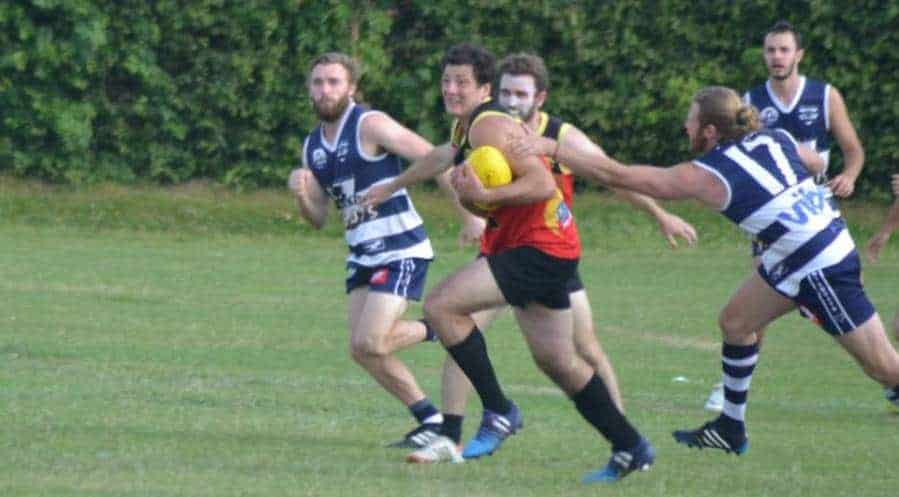 With only 25 minutes of footy remaining, the game had changed dramatically. The Wildcats now had the benefit of a very strong breeze, and were not giving up. From the moment the umpire bounced the ball, they controlled the play. Costly and Della-Vedova in the middle of the ground were on top. Midway through the quarter the Wildcats had scored four goals and the lead was shrinking. A sudden break in the middle of the ground saw Lions ruck Blake Seeley collect a handball. With no one in front of him he took three bounces to kick a steadying goal for the Lions. It was a pivotal moment, and despite another two goals for the Wildcats, the siren sounded with the Lions up by 10 points.

Other AFL London Premiership results in Round 9: