Lions roar over Demons and in to AFL London Grand Final

AFL London Finals Week 2: It was an absolute thriller of a Preliminary Final up in Bounds Green.

With one win a piece for the day in the support games, the North London Lions and Wandsworth Demons lined up ready to face off for a place in the 2015 AFL London Premiership Grand Final where the Wildcats await.

In typical Bounds Green fashion, a slight downhill slope and stiff breeze benefited the south end of the ground. Despite the unfavourable end, the Lions came out tough and fast, working hard to keep up with the Demons. Keeping goal for goal; dominating ruckman, Blake Seeley and a booming goal from the left pocket by Cal McIntyre, had the Lions showing the Demons what they were made of. Despite this, the Demons had their fair share of the ball with George Whiting slotting two ripping goals and Tyran Bell reading the ball exceptionally to deliver the Demon’s third goal before the first break. 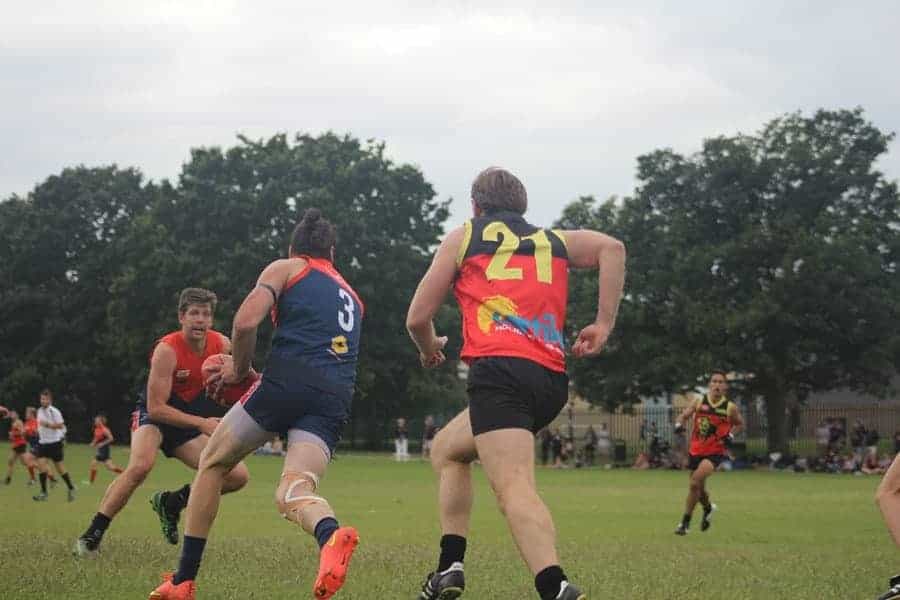 Taking to the uphill end of the ground, the Demons looked feisty. However, the Lions were able to capitalise on a couple of small mistakes and dominate the possession early on. A bit of tug-o-war had the ball in no-man’s land for a good portion of the quarter. Demon’s last line of defense, Sean McManus, made an immense impact and was able to help stem the flow while Trent Georgiou broke the arm wrestle to kick the Demons solitary goal for the quarter. The Lions answered, laying it on thick, and were able to score when the opportunity presented itself, taking the margin to a solitary point at the major break.

The Lions started the third with two quick goals from Rurory Kirkby and Blake Seeley. Dominating the possession, Seeley in particular applied constant pressure around the ball and was ever present, working hard. Ben Quick had Georgiou tagged, keeping him at his solitary goal for the Demons. For the most of the quarter it was a scrappy affair, predominately in the centre of the ground; it was with this that Demon Orlando Morales opened the floodgates, kicking the first of the Demon’s five goals for the term. Wandsworth’s Michal Pitman contributed two much needed goals at the most crucial time. Similarly, Charlie Steel was an absolute workhorse across the field, coming out with an epic snap on the run just outside the fifty, followed by Andy Smith slotting one more just before the siren.

You could cut the tension with a knife after the Demons last minute surge in the third. With only seven points the difference the fourth saw a lot of desperate football and hard work. Fatigue was setting in but the intensity didn’t falter; the crowd were on their feet in what felt like the longest quarter imaginable. A couple of points and a goal from Lion, Kirkby, flipped the table and the Lions had the Demons by a point. Retaliation saw the Demons surge forward as a runner called out that there was just one minute remaining, but a flooded backline forced a rushed behind to even the score. The crowd was roaring as the Lions made their way up the wing, frantically in need of any digit on the scoreboard. A brief turnover was cut short by a great smother from Lion, Louis Manning, who turned his man and delivered to Conor Fitzgerald as he ran into an open goal to put the Lions up by six points. Back at the centre bounce it was too little too late, as the whistle blew the Lions into the Grand Final with a roar against the almost-undefeated West London Wildcats.

Wildcats purr-fect day in Chiswick, just one stop from glory