The Wandsworth Demons vs West London Wildcats AFL London clash on Saturday was a much anticipated match for two reasons. Not only was it the top of the table encounter between these two age-old rivals, it also coincided with the ‘Freeze the G’ event at the MCG in Melbourne.

Being connected to the Melbourne Demons, the Wandsworth Demons jumped at the idea of being a part of the ‘Cure for MND’ foundation and running a fundraiser of their own; ‘The Big Freeze the C’.

Being held at their home ground, Clapham Common in London, all proceeds from the raffle, bake sale, and selling of the notable blue beanies and caps went to raising money and awareness for MND.

Although it wasn’t a successful day for the Demons, who went down to the Wildcats by 13 points, it was a great fundraiser making over £1,200 for the Cure for MND foundation.

The West London Wildcats won the Social and Conference grades too, by 57 and 97 points respectively, before the bounce of the Premiership match. As the heavens opened, the rivals took to the ground for the 1 v 2 match-up.

Intense ferocity was the theme of the game from the centre bounce – both teams were there for the four points and it was obvious from the get-go. 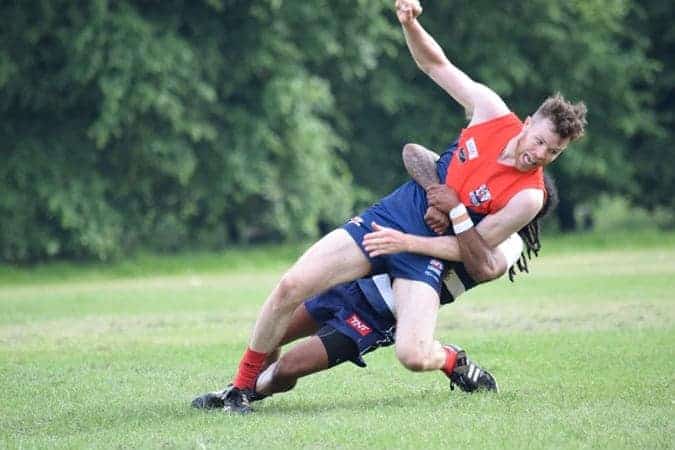 The Demons had a big first half. Strong forward Geoffrey Rouse stamped his dominance kicking four of his five goals whilst the backline was virtually impenetrable.

Alex ‘Nic Nat’ Watson laid a couple of huge tackles getting the crowd roaring and the momentum flowing in the Demons’ favour. Going into the major break with a three goal lead, they were looking comfortable and had the game under control.

The third quarter saw the end of the Wildcats’ slow start. Speed-demon Alan Challis was again brilliant for the Wildcats, prominently moving the ball through the midfield and into the trusty hands of Jared Risol. Demon Sam Drake had managed to keep Risol to a solitary goal in the first half with his resilient defensive pressure but a slight ease-off allowed Risol to play a significant role in the turn around.

The Demons were still in the game when Joseph Ferguson-Lane kicked a crucial major from a strong contested mark in the final minutes of the third.

With only a four point deficit, a superb four goal burst by the ‘Cats to start the final term had the Demons on the back foot. They attacked relentlessly while the Demons searched for answers.

Whilst both sides continued the game’s unrelenting intensity, the Wildcats pulled ahead. Converting goals from Pfieffer, Finn, Duryea and Horan with his third, the Demons were only able to respond with a solitary goal from McLeay.

A final push from the Demons in the remaining few minutes had Wildcat Mike Gregson intervene. Intercepting the ball moments before it entered the Demons forward fifty, the Wildcats held possession and ran out the game.

Despite the loss, the fundraising Demons were in good spirits. The traditional boat race was scrapped for an alternate Big Freeze version. The five-person race had each player eat a cupcake, drink a beer and have a tub of icy water tipped over their heads before moving on!

Best on ground honours went to Alex Watson and Alan Challis in what looked like could be the 2016 AFL London Grand Final match-up.