AFL London’s three flag fancies - Wandsworth, West London and Putney - all continued their winning ways in an action-packed Round 5 at the weekend. 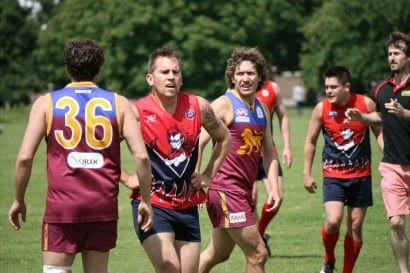 By Lee Crossley
AFL London’s three flag fancies – Wandsworth, West London and Putney – all continued their winning ways in an action-packed Round 5 at the weekend.

The Wildcats were 99-point winners over Wimbledon, but things were tighter at Shoreditch and Clapham where Putney and Wandsworth met tough opposition from the Swans and Lions respectively — just managing to get the job done.

The Lions, slow starters this year, dominated the first term, kicking four goals to nothing.

Skipper and key forward Courtney Shergold went down with a game-ending injury close to quarter time, but even with the spearhead off the field, the Lions held their own to maintain a 23-point buffer at the main break.

However there is an air of confidence about this year’s Wandsworth side that suggests they are never out of the contest — such was the case again on Sunday.

This was when the Demons flexed their collective muscle, with skipper Mark Brescacin kicking several crucial goals, Daniel Broderick showing his class in the midfield and Rhys McNay getting on top in the ruck. 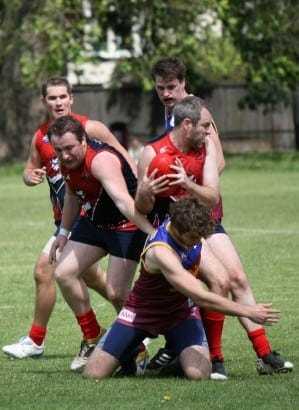 Jason Wood was important sweeping across halfback, too, as the Demons piled on five goals to nothing in the third term to lead by nine points at the last break.

From there, the Lions confidence was shot and with inferior fitness, they could not withstand the last-quarter Demons’ charge, going down by 34 points.

An upshot for the North London team was that Quentin Keeble was a shining light up forward, booting four goals for the Lions.

Despite the loss, the Lions showed enough to convince onlookers they will challenge the top three teams if they make the finals.

“They were hard at the footy and had some tough bodies.  I think towards the finals if they get a full side up they’ll be a hard side to beat.”

Browne paid tribute to the Demons fitness and local ground.

“Having Clapham Common as our home – we really use it well for training and we really ran over them in the end.

“Simon Callahan was great in the midfield and I couldn’t praise our ROW (Rest of the World) boys James O’Connell and Connor Nevin enough. I’d pick them if they were Aussies.”

Browne said the Round 6 match against Putney presented the club’s “toughest test” this year.

“It will test our depth with Ascot Races and Isle of Wight on,” he said.

“We beat them by five goals in Round 1, but we’re expecting our hardest game to date against them at their home. A really big test.”

On Saturday swirly conditions played havoc with the air conveyance at Barn Elms and Shoreditch.

The Magpies’ midfield was served well by Clayton Fitzgerald and captain Greg Chapman, who was an unlikely goal kicker in the tricky conditions with four goals.

The Swans got out of the blocks early and kicked two goals into a five goal breeze.

Putney won the match in the last term when going into the breeze Greg Chapman sealed the winner with a fantastic roving effort from a ball-up in the forward line.

At Barn Elms, Wimbledon started well against the Wildcats, getting the first two goals, before West London could get out of first gear.

The Wildcats went on to win 19.21 (135) to 6.5 (36) in a final scoreline that flattered the Cats and probably did not reflect the Hawks competitiveness, particularly in the first three terms.

The Cats finished with eight unanswered goals to crush the visitors. Adam Broadbent returned to the side to skipper the Cats and boot a lazy seven majors.

Alex Adams, who’s had the ball on a string in the conference division, was promoted to the premiership and did not look out of place.

Stuart Ward was again solid at full back while Jarrod Sporrell was reliable in the ruck.

Cats coach Nathan Costley, back from Australia and recovering from pneumonia, said their Round 6 opponents North London presented a major threat.

“I think they have as good a chance as anyone to win the flag,” he said.

“I think they’ve got a really good team and next week’s not great for us. I don’t know what the North boys are like but got a few going to Ascot Races and Isle of Wight so it will be interesting.”

Which team are you tipping to win the AFL London flag in 2012? Tell us below: