Improving is incentive for Anna Meares

Anna Meares accepts she can't top her London Olympics heroics but she believes she can get better - and that's the incentive that could keep her on track to Rio 2016. 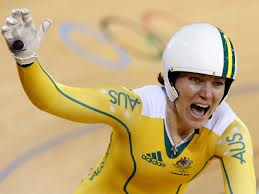 ANNA MEARES accepts she can’t top her London Olympics heroics but she believes she can get better – and that’s the incentive that could keep her on track to Rio 2016.

After a track cycling career spanning three Olympics, Meares turned 29 this week with plenty to ponder as she decides whether to commit to attempting a Games title defence.

Turning the tables from Beijing 2008 to win the Olympic sprint gold in a dramatic final against great rival Victoria Pendleton in the British star’s farewell before home fans in London was about as good as it gets.

But Meares says her 2012 achievement could provide a launching pad for the future.

“I don’t think there’s a way that I can (top it) but I don’t see being successful at that level as being a limiting factor, I see it as a springboard to being better,” Meares said on Tuesday.

Meares is on a training break until the end of the year to give herself some space from the emotional upheaval of London and to consider her future in cycling.

“I did the same thing after Beijing and it worked very well,” she said.

“Our sport’s quite a low impact sport so if you look after your body you can progress for a long time. It’s just whether you want to or not.

“You can be swayed by the emotions of successful or unsuccessful performances, the highs and adulations offered to you when you go home. If I answered that question now I’d say `yeah, Rio’.

“But I just want to make sure, because four years of (training and competing) physically and mentally, it’s a big commitment.”

Meares believes her rivals would continue bring out the best in her and there’s tough competition there despite the retirement of Pendleton.

“I’m going to have some very big challengers coming up in the next few years who are already there – but our sport is one that takes time to develop in, physically, for women in particular.”

She cites Chinese star Guo Shuang, who won the sprint bronze in London after a bronze in Beijing, as her greatest current threat.

“We’ve had quite a few little battles over the years,” said Meares.

“She’s probably one of the few complete sprinters and because she has so many cards in her deck that she can play, it makes her very dangerous.”

Germany’s Kristina Vogel, who Shuang beat for the bronze in London, is another who might lay down a challenge to Meares given her tactical nous.

“She’s only 21 so she’s got time to develop physically, but in her mind she’s one of the craftiest, great tacticians in the women’s field,” said Meares.

“I’m always learning, always challenged in a different way because everyone has a different strength.

“What I worked out about how to race Vicky might not work with someone like Guo Shuang or Kristina Vogel.” – AAP