Tickets to next year’s eagerly anticipated ODI cricket tournament in Britain, the ICC Champions Trophy, are set to go on sale. 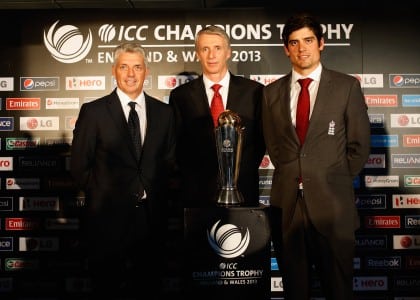 THE International Cricket Council (ICC) announced on Wednesday that tickets for the fifteen matches of the ICC Champions Trophy in June 2013 will go on sale to the public on Monday 5 November 2012 at 10:30.

The ICC Champions Trophy features the eight best one day international teams in the world (according to the Reliance Mobile ICC ODI Rankings) and will be played out across three grounds — Cardiff Wales Stadium, The Oval and Edgbaston — over eighteen days (6 — 23 June 2013).

Ricky Ponting, the former Australian cricket captain and two-times winner of the ICC Champions Trophy, said: “Winning the Champions Trophy in 2006 and 2009 are two of the proudest moments in my career and it was always a tournament that I looked forward to playing in.  Next year will be the last ever Champions Trophy and that will make it even more special for the eight countries competing.  It’s going to be an amazing few months of cricket in England with the Champions Trophy in June followed by the Investec Ashes Series throughout July and August.”

Speaking at the tournament launch event in London on Wednesday, David Richardson, ICC CEO, said: “We have the top eight sides in the 50-over format taking part at three world class venues competing for national pride as nation takes on nation. With the action on a daily basis in the group stages of this competition, cricket lovers have the chance to live every ball of every match every day.

“We also know that because of the diversity of cultures in the United Kingdom that each team taking part can be guaranteed ‘home support’ and because the demand for tickets will be so high we urge everyone to reserve their place at this special tournament as soon as possible.”

Elworthy said: “We cannot wait for the start of the ICC Champions Trophy in June 2013, and are delighted to announce ticket details for the tournament.  In a summer packed full of cricket, we’ve ensured that fans across England and Wales can enjoy world class cricket at exceptional value.”

Alastair Cook, England captain, said: “Next summer’s ICC Champions Trophy is a very important event for us as a side. We don’t often get the opportunity to play an ICC World event on home soil, and as we have a very good home record we have the chance to do something special next summer.”

The tournament begins on Thursday 6 June 2013 when India face South Africa at Cardiff Wales Stadium, and closes with the Final on Sunday 23 June 2013 at Edgbaston. The eight teams are split into two groups, with each team playing 3 group matches. The top two in each group progress to a semi-final, and the winners of the semis meet in the Final.

Group A Winner v Group B runner-up, June 19, The Oval;