Huge pressure for Mark Webber at Monaco in F1

The Monaco F1 Grand Prix this weekend looms as a career-saver for Australia's Mark Webber. 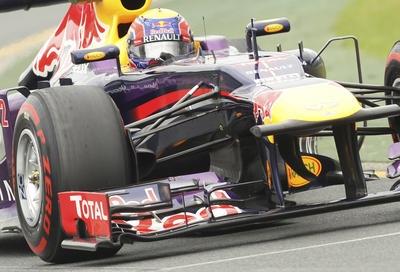 THE Monaco F1 Grand Prix this weekend looms as a career-saver for Australia’s Mark Webber.

Webber is the defending champion in Monte Carlo, a round he also won in his 2010 breakout season.

The 36-year-old is under pressure to win soon to have any chance of retaining his Red Bull seat next year and extending his contract.

Red Bull boss Christian Horner has not ruled out signing the veteran to partner Sebastian Vettel for 2014, but will have no option but to let him go if Webber cannot produce his best form soon.

Webber is known for his qualifying pace and a spot on the front row of the grid on Sunday would put him in a prime position to snare the 10th grand prix win of his career.

Both Lotus driver Kimi Raikkonen and Torro Rosso’s rapidly-improving Australian Daniel Ricciardo have been linked to Red Bull next year.

Horner was cagey about Webber’s prospects with the championship team, saying that the Monaco GP presents both pressure to perform and the chance to prove he is still competitive.

“At the end of the day there is pressure to perform, but that exists for all the drivers.

“Monaco is a circuit that Mark in particular enjoys and excels at so hopefully he can have a very strong run there.”

But Horner said no decisions would be made on a second driver at least before the midway point of the season.

And he said Webber was still in the mix for a seat.

“We’re only five races in and just a quarter of the season through this championship,” he said.

“Our decisions regarding drivers will be made in the summer and Mark (will be considered) if he’s delivering and motivated and has the desire to continue.”

He said that Webber would be looked at “very, very closely” as a driver the team knew well and who had achieved good results for them.

“But no decisions will be made about drivers until later in the summer.”

Webber was on track for victory in this year’s Malaysian GP before he was unexpectedly jumped from behind by Vettel who disobeyed team orders to remain behind the Australian and accept second place.

Nevertheless, the incident has been forgotten by the team, which is now focused on helping the championship-leading German take out his fourth straight world title.