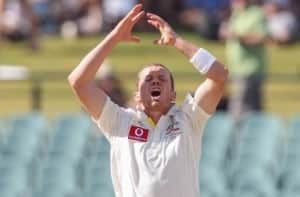 Bairstow had made 21 runs when he was bowled by Siddle, however the wicket was disallowed by the third umpire after it was determined that the bowler had overstepped in his delivery. Bairstow added an additional 46 runs to England’s tally after Siddle’s no-ball, and remained in partnership with Ian Bell for a further 27 overs.

Harris, who yesterday played his first test for Australia since 2012, said that Siddle’s failure to bowl out Bairstow had disappointed recently appointed coach Darren Lehmann and had cost the team a significant number of runs as the day went on. He said that all bowlers knew that the line was there and that Australian players worked hard in training to avoid stepping over it.

Harris said: “There is no excuse for it. The line is there for a reason. It is not acceptable. It cost us a lot of runs today and potentially it can cost the Ashes. The guys work hard on it in training so we don’t get into any bad habits.

“There was disappointment when it happened and Darren (Lehmann) was not happy when we got to lunch. You just can’t afford to take eleven wickets. It was probably the only one he bowled all day but it happened to be a wicket and it is funny how it works like that.”

Harris was brought into the team alongside Usman Khawaja for the second Ashes test, which began yesterday at Lord’s. He has only played twelve test matches for Australia in the three years since his debut due to a series of debilitating injuries.

Harris said: “It has been frustrating. If I am bowling well I know I can play at this level but it is just trying to stay fit. I have got constant niggles. It is a matter of managing that. My goal on this tour is to be on the plane home with the rest of the guys instead of going home early (with injury).”

Day one of the second Ashes test ended with England on 289-7 after a century from Ian Bell broke England out of a 28-3 slump early in the innings. Bell was eventually bowled out by Steve Smith, breaking his 144-run partnership with Bairstow.