AFL LONDON | Finals week 1 wrap: Dees pip Wildcats in game of the season to book the first slot in the big one while Raiders and Giants grab their places in the other season enders.

by Joshua Pearson
in Sport 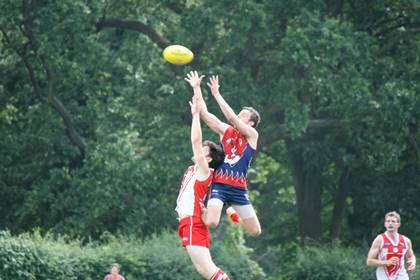 The steamiest weekend of the summer brought out some of the hottest footy of the year as AFL London teams battled it out for the right to be there at the end of the season.

In the Premiership, Wandsworth and West London continued their rivalry in what was easily the best game of the year so far. While the Raiders romped into the Conference grannie and in the Social grade the South East London Giants booked their place in their first ever Grand Final by defeating Ealing.

The rivalry between Wandsworth and West London has been fierce all season, as you’d expect from two of the AFL London foundation clubs. They both won their respective home matches and have been slugging it out from Round 1 for the minor premiership – that honour went to the Demons with the Wildcats finishing second. But they played for a bigger prize on Saturday – the first spot in this year’s Grand Final.

Everyone who was at Peckham Rye Common were treated to a feast of fantastic footy right from the first whistle. Neither team gave an inch in the midfield. Whenever the ball got loose through a burst of skill and speed, the battle for supremacy followed it. The lead changed hands fifteen times on the day and no team led by more than two goals at any stage of the game. The Cats and the Dees traded early goals in the first five minutes, with the Cats opening the scoring thanks to a hard won free kick inside their attacking 50 at a tight angle. The Dees hit back almost immediately and although West London applied pressure with wave after wave of Inside 50s in the final few minutes, at quarter time they were down by five points.

The second quarter saw a change forced upon the Demons with their CHB, Josh Walker, being forced off the field with a shoulder injury. This saw AFL London 2014 leading goal kicker, Trent Georgiou, being shifted onto the half back line, although it didn’t stop him from kicking seven goals for the day. West capitalised on the change in dynamic and, thanks to excellent work around the ground by Todd Pfeiffer, they were able to kick two unanswered goals. Despite the Cats control of the ball, the Demons were able to fight back and the two sides went in to the main break locked at 7.5 apiece.

For the spectators, the second half was a testament to how beautiful and ferocious our wonderful game can be. West London struck early with more inside-50s and they began to look like they might run away with it. But Wandsworth struck back hard with two unanswered goals and despite more excellent work from Pfeiffer, and a gem of a long bomb that gave them a brief lead, the Cats went into the final break a goal down.

Determined to have the week off before the Grand Final, West London kicked another two majors to open the final quarter and give themselves a slim advantage. However, cometh the hour, cometh the men and for the Demons those men were Ryan Price and Mark Brescacin; the former getting quality delivery out of the midfield and the latter kicking all three of his goals for the day in the final quarter to keep the Demons in touch. With West London holding a three point lead and only five minutes to play, Georgiou found himself shifted back up forward and with his back to goal and ball in hand, kicked a miracle goal back over his head to give Wandsworth a lead that they didn’t let slip.

The second game of the Premiership was played between North London and Putney for the right to face the Wildcats next week.

The skills on show were high once again but they had a tough act to follow, and with North London kicking the opening five goals of the match, it gave them the mental edge they needed to continue on with the match. Putney fought all day but they have struggled this year and unfortunately for them it was not meant to be.

Blake Seeley was immense for the Lions in the ruck, letting them get, pardon the pun, the Lion’s share of the ball from most stoppages. Justin Gauchi benefitted greatly from all this clean possession, kicking four goals for the day.

In the second quarter, Putney got back off the floor and came back at the Lions, sending the ball forward whenever they had the chance. Whenever they did get the ball into their attacking 50 however, Morgan Turner of the Lions was there fighting to frustrate them and stifle their scoring opportunities every time. He is one of a number of Canadians who have joined AFL London this year and contributed magnificently for their respective clubs. Long may it continue.

In the second half, the Lions put their foot back on the pedal and pulled away from the Magpies, Jason Rand and Matt Lello particularly impressing. Slick use of the ball allowed the Lions to share the goal scoring throughout the forward line, Lello and Cal McIntyre both managing to kick three for their club.

This is a win that will be a huge confidence boost for North London, the 2012 Premiers, and they will go into next week’s game against West London with every chance of knocking off the 2013 Premiers in what will be a replay of last year’s Grand Final. The game at Mostpur Park on Saturday will be an absolute humdinger, of that there is no doubt.

The Raiders have long history of winning the Conference in London and on Saturday they showed exactly why. They dominated from start to finish, never really letting Regent’s Park get their paws in the door. Wasteful kicking from the Raiders meant at quarter time they had kicked 2.7 but from the start of the second quarter it was all one way traffic.

Kevin Upton was rewarded handsomely for his work in the forward line for the Raiders, kicking multiple goals and always looking dangerous. The Raiders went on to kick 6, 5, and 6 goals respectively in the remaining three quarters.

This defeat will be a difficult one to recover from for the Lions, though they will have to do exactly that in time for Saturday’s game against Clapham if they want to salvage something from their season.

The Swans have really stepped up their game this year in the Conference, pushing a lot of teams to the absolute limit most days. It has only been their inexperience and lack of composure that has cost them and to that end, an appearance in the finals will go a long way to helping them gain the experience they need.

Again they pushed Clapham hard, the first quarter was even at 1.3 apiece. Disappointingly, they didn’t keep the pressure up during the second and third quarters and Clapham showed their class and courage, building a seven goal lead at the final break.

This Clapham win was built on the hard work in the midfield by Mitchell Thomson, Adam Jeffery and Steve Graeme, as well as the energy of internationals Bruno “Spanish” Rodrigues and Andrew Falk who buzzed around the ground all day.

The Giants have been something of a revelation this season, and they looked to continue their fine form this year by defeating Ealing and earning their club a first ever Grand Final appearance.

It was an emotional day for the Giants, with club legend and potential life member Troy Tassef also playing his final match for the club.

This was another match that went right down to the wire. The Emus were up by three with only two minutes to play. But Michael Wilson and Lee Jarvis had worked tirelessly all day for the Giants and were key contributors at the end, when South East London were able to kick two goals in the space of two minutes and seal their first ever Social Division Grand Final berth

Two time defending champions Reading went into this game without the AFL London Social Best and Fairest, Nathan Grindall, who has for so long been their rock at the back.

South London were looking to complete a perfect weekend for the Demons, joining their Conference and Premiership club mates in the next round of the finals. Unfortunately for them, it simply wasn’t to be. This was a hard fought battle between two proud clubs and it wasn’t until the third quarter when Reading were able to final pull away, kicking three unanswered goals thanks to their ruckman taking over the clearances in the premiership quarter. The Demons mounted a comeback in the final quarter but, despite James Geale’s four goals for the match, fell nine points short and their season is over.

Wandsworth through to the Grand Final, North London and West London to play for the right to face them.

Shepherd’s Bush through to the Grand Final, Clapham and Regent’s Park to play for the right to face them.

South East London in the Grand Final, Ealing and Reading play for the right to face them.

AFL London in Season 2014 is proudly supported by Sanza Teaching.  The Season continues from this point until the Grand Finals are played on the first weekend of August.  To find out more or get involved visit www.afllondon.com